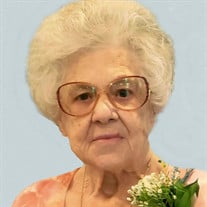 Barbara Camp Heffinger, 84, of 1600 Hunting Hills Rd., Danville, VA, died unexpectedly on Monday, July 1, 2019. Mrs. Heffinger was born in Charlotte, NC, on July 9, 1934, a daughter of the late Thomas Franklin Camp and the late Agnes Mae Davis Camp. She lived most of her life in the Danville area where she worked for Roman Eagle Rehab and Healthcare Center. She was a member of the Church of God of Prophecy. On October 25, 1952, she married Boyd Clifton Heffinger, Sr., who died on April 27, 2016. She is survived by a daughter, Karen Craddock (Alan), of Danville, VA; a son, Allen W. Heffinger (Billie), of Danville, VA; nine grandchildren; fifteen great grandchildren; a great great grandson; three brothers, Thomas, Richard, and Max Camp; and a son-in-law, Clay Bayes. In addition to her parents and husband, she was predeceased by a son, Boyd C. Heffinger, Jr.; and a daughter, Kathy Heffinger Bayes. Funeral services will be conducted on Thursday, July 4, 2019 at 11:00 AM at the Wrenn-Yeatts Westover Chapel with Pastor Kenny Gunn officiating. Interment will follow the service in Danville Memorial Gardens. The family will receive friends at the funeral home one hour prior to the service and at other times will be at her residence. In lieu of flowers, the family suggests memorial donations be made to Mt. Herman Fire and Rescue, 4268 Franklin Turnpike, Danville, VA, 24540. Wrenn-Yeatts Westover Chapel is serving the Heffinger family.

The family of Barbara Camp Heffinger created this Life Tributes page to make it easy to share your memories.

Send flowers to the Heffinger family.