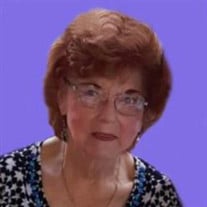 Barbara Ann Reynolds Hunt, 89, of Danville, VA, went Home to be with her Lord and Savior on Friday, March 5, 2021, at her residence, after a decline in health for the past two months. Mrs. Hunt was born on February 15, 1932, a daughter of the late, step-father, Henry K. Ferrell, and the late Carrie Barbour Ferrell. She spent all of her life in the Danville area where she worked as a seamstress for the Gingerbread House from 1987 until 2000. In her spare time, she loved spending time with her family, especially her grandchildren. She was a member of the former Baptist Tabernacle. On January 3, 1961, she married William “Bill” Louis Hunt, who predeceased her on January 21, 2006. She is survived by four daughters, Debra D. Easley, of Ringgold, VA, Jamie M. Roberts (Art), of Milton, NC, Sarah H. Talbard (Bobby), of Blairs, VA, and Sherry H. Overby, of Danville, VA; seven grandchildren, Robert Allen Easley, III (Lynsey), Hannah M. Guthrie (Blake), Hillary Milam, Hunter Milam (Victoria), Jonathan Talbard, Jordan Talbard, and Carrie Ann Talbard; a great grandson, Louis Bennett Milam, and two brothers, Glenn Reynolds (Dorothy) and Reginald “Reggie” Ferrell (Sandra). In addition to her step-father, mother, and husband, she was predeceased by a brother, Luke “Buddy” Reynolds; a step-brother, Henry K. Ferrell; two step sisters, Jeanette Rose and Lois Richardson; and two son-in-laws, Robert A Easley, Jr. and Dennis W. Overby. A funeral service will be held on Tuesday, March 9, 2021 at 2:00 PM at Compassion Church (former Third Ave. Church) with the Rev Dr. Doug Barber and Pastor Jeff Lynch officiating. Interment will follow the service in Highland Burial Park. The family will receive friends at the church, prior to the service, from 12:30 PM until 1:45 PM. The family would like to extend a special thanks to the staff of Liberty Hospice and her caregivers, Ann Hamlett and Brenda Garner. In lieu of flowers, the family suggests that memorial donations be made to Compassion Church, 215 3rd Ave., Danville, VA, 24540, or to God’s Pit Crew, 2499 N Main St., Danville, VA, 24540. Wrenn-Yeatts North Main Chapel is respectfully serving the Hunt family.

Barbara Ann Reynolds Hunt, 89, of Danville, VA, went Home to be with her Lord and Savior on Friday, March 5, 2021, at her residence, after a decline in health for the past two months. Mrs. Hunt was born on February 15, 1932, a daughter of... View Obituary & Service Information

The family of Barbara Ann Reynolds Hunt created this Life Tributes page to make it easy to share your memories.

Send flowers to the Hunt family.