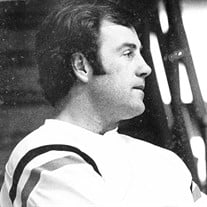 Barry Lee Yeatts, 69, of 1 Yates Avenue, Danville, VA went home to be with his Lord and Savior on Saturday, December 21, 2019 after being in declining health for the past year. Born April 13, 1950 in Danville, Barry was the son of the late Noble Wilson Yeatts and Katherine Crowder Yeatts. He spent all of his life in the Danville area and was a 1968 graduate from Dan River High School. He then attended Hargrave Military Academy. In his earlier years, Barry was injured during a diving accident, which left him partially paralyzed. Through his hard work and determination, he was finally able to walk again. He then became co-owner of "The Gym" in Danville, and later went to work with Southern VA Institute as their Purchasing Manager until his retirement. He was a faithful member of St. Mark Pentecostal Holiness Church where he had over 10 years of perfect attendance. Barry had a love of music and the sound of stringed instruments. He became fascinated with the violin after hearing his niece, Jenna, play. His interest was such that not only did he learn to play, but also learned the craft of building the instrument from start to finish. Barry was the only brother to four sisters who he cherished dearly. Recently, during a family visit with all five siblings present, he expressed his love and appreciation to them. He told his sisters that when it became time for one of them "to go", he wished that they could all go to heaven together. His loving sisters he leaves are Joy Garber and husband, Jim, of Hartselle, Alabama; Kathy Richardson and husband, David, of Danville, VA.; Patty Turner of Danville, VA and Pamela Campbell of Pelham, NC. Barry also leaves behind two wonderful friends since childhood, Guy Lankford and Mike Gauldin, who were like brothers to him; as well as his beloved cats, Mommy and Sissy. Barry was pre-deceased by a sister, Cindy Darlene Yeatts, his paternal grandparents, Benjamin Lee Yeatts and Carrie Price Yeatts, his maternal grandparents, James Anderson Crowder and Althea Shelton Crowder, a nephew, Clinton Campbell, and two brothers-in-law, Mike Turner and Jimmy Campbell. Funeral services will be conducted on Saturday, January 4, 2020 at 11:00 a.m. at St Mark Pentecostal Holiness Church with the Rev. Dr. Jerry Foley officiating. Interment will follow the service in Highland Burial Park. The family will receive friends prior to the service from 10:00 am to 11:00 am at the church and at other times will be at the residence of his sister, Kathy and David Richardson, 1792 South Boston Rd, Danville, VA 24540. In lieu of flowers, the family suggest that memorial donations be made to St Mark Pentecostal Holiness Church, Building Fund 1201 South Boston Rd, Danville, VA 24540. Wrenn-Yeatts North Main is respectfully serving the Yeatts family.

Barry Lee Yeatts, 69, of 1 Yates Avenue, Danville, VA went home to be with his Lord and Savior on Saturday, December 21, 2019 after being in declining health for the past year. Born April 13, 1950 in Danville, Barry was the son of the late... View Obituary & Service Information

The family of Barry Lee Yeatts created this Life Tributes page to make it easy to share your memories.

Send flowers to the Yeatts family.