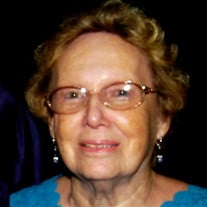 Betty June Downs Browning, 90, of 324 Starmont Drive, Danville, VA, died Sunday, March 3, 2019 at Sovah Health of Danville. Betty was born in Topeka, Kansas on August 11, 1928, a daughter of the late Frederick Downs and Irene Horsley Downs Binney. She lived her early years in Topeka, Kansas and had been a resident of Danville, VA since 1966. Betty was a loving wife, mother, grandmother and great-grandmother. She was a member of Sacred Heart Catholic Church and was a member of the Knights Ladies Auxiliary while her health permitted. She was a volunteer at Sovah Health of Danville and enjoyed gardening, painting, and was an avid sports fan. On May 6, 1949 Betty was married to William Donald Browning, who survives. In addition to her husband, of the residence, she is survived by six sons, Michael William Browning (Kelly) of Union, Kentucky, Stephen Charles Browning (Linda) of Virginia Beach, VA, Joseph Patrick Browning (Mary) of Wilmington, NC, Timothy Donald Browning (Gwen) Danville, VA, Brian Anthony Browning (Sharon) of Danville, VA, and Barry Alan Browning of Danville, VA; eleven grandchildren and four great grandchildren. Betty was predeceased by a brother, Robert Downs and a sister, Garnett Alfrey. A funeral mass will be held on Thursday, March 7, 2019 at 11:00 A.M. at Sacred Heart Catholic Church with the Rev. Father Jonathan Goertz officiating. Interment will follow at Highland Burial Park. The family will receive friends on Thursday, March 7, 2019 at the church from 9:30 until 11:00 A.M. and suggests memorials may be made to the Sacred Heart Catholic School, 540 Central Boulevard, Danville, VA 24541. Wrenn-Yeatts North Main Chapel is serving the Browning family.

The family of Betty Downs Browning created this Life Tributes page to make it easy to share your memories.

Send flowers to the Browning family.