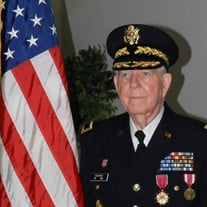 Billy Wiseman Scearce, Sr. 85 of Danville was called home to heaven on Sunday, August 15, 2021. Born September 23, 1935, he was the son of the late Forest W. Scearce and the late Ruby C. Scearce. He joined the Army National Guard when he was 16 years old and remained in service 43 years and 8 months and 15 days; 37 ½ years of that time was full time service. He began his career in what was known as the Brown Shoe Army, and he always remembered dying those brown boots and shoes black. He advanced through the ranks from Private to Colonel and was promoted in retirement to the rank of Brigadier General. He was awarded the US Army Legion of Merit Medal, US Army Meritorious Service Medal, Army Commendation Medal, Army Achievement Medal, Army Good Conduct Medal, National Defense Service Medal, USAR Achievement Medal, Armed Forces Reserve Medal, Humanitarian Service Medal, Federal/State, VANG Service Ribbon with #43 Dev. VANG Commendation Medal, VANG Bronze Star, VANG Perfect Attendance Ribbon. Billy was member of the Danville Sertoma Club, serving several years as Chaplain, and one year concurrently as President. He also served on the board of The Danville Chapter, American Red Cross. He was compassionate toward the Native Americans. He gave financial support to St. Labre, St. Joseph Indian Schools, Sioux Nation Relief Fund, Southwest Indian Relief Council, and Council of Indian Nations. Billy was an avid western fan. He loved and collected western movies and his favorites were Roy Rogers and Gene Autry, but he loved them all. His entire wardrobe consisted of nothing but western style jackets, trousers, and boots. While Billy was at Ft. Sill, OK, Willis Memorial Baptist Church in Cascade, VA asked him if he would be their Pastor when he completed his tour Ft. Sill. Billy accepted the call after his Battalion Commander, LTC Henry I. Slayton, Jr., agreed to let him serve the church as long as it did not interfere with his military duties. Billy served as pastor for seven and a half years. He resigned, and was the founding pastor of Brush Arbor Baptist Church, where he served until he was military transferred to the 116th Infantry (Stonewall) Brigade (Separate) in Staunton, VA, which soon became a unit of the newly re-activated 29th Infantry Division, headquartered at Ft. Belvoir, VA. While in Staunton, approximately 3 years, Billy served as Interim Pastor at First Baptist Church in Staunton, VA for one year. During that time, he founded and was President of “Beulah Land Missions Inc.” Shortly afterwards, Billy was transferred to the Adjutant General’s Office in Richmond, VA. He remained on the General’s senior staff until his retirement from the military on September 30, 1995. Sandy Shores Baptist Church called Billy to be their Pastor and he began those duties on the first Sunday in October 1997. While he was serving militarily, Billy continued to further his education. He earned a Bachelor of Individualized Studies from Virginia State University; He earned a Bachelor of Theology Degree, Master of Theology Degree from International Seminary (Endorsed by the Department of Defense) and after his retirement, the Board of Directors of International Seminary awarded Billy the Honorary Degree of Doctor of Divinity. On July 2, 1955, he married Kathleen Barbour Scearce, who passed away on October 16, 2016. He later married Sylvia Clark Scearce, who survives. Survivors also include a son, Billy W. Scearce, Jr., (Mary Anne), two step-sons, Carson Clark (Shelby) and Eric Clark (Clover), a brother, Basil Scearce, six step-grandchildren, Leigh Anne Ottaway, Patrick Ottaway, Spencer Clark, Ashley Clark, Kaden Clark and Grace Clark. In addition to his first wife, four brothers, Landon, Dennis, Tommy and Frederick Scearce, predeceased him. Funeral services will be held on Saturday, August 21, 2021 at 11:00 AM from the graveside at Danville Memorial Gardens with the Rev. Haywood Alcorn officiating. In lieu of flowers, the family suggests that memorial donations be made to the Riverbend Fire Dept. Wrenn-Yeatts Westover Chapel is serving the Scearce family.

Billy Wiseman Scearce, Sr. 85 of Danville was called home to heaven on Sunday, August 15, 2021. Born September 23, 1935, he was the son of the late Forest W. Scearce and the late Ruby C. Scearce. He joined the Army National Guard when he was... View Obituary & Service Information

The family of Rev. Billy W. Scearce Sr. created this Life Tributes page to make it easy to share your memories.

Billy Wiseman Scearce, Sr. 85 of Danville was called home to...

Send flowers to the Scearce family.