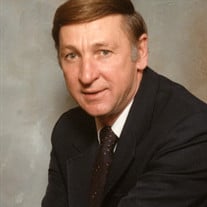 Carl James Brotherton, 84, of 402 Westview Drive, Danville, VA went home to be with his Lord on Saturday, October 26, 2019 at Duke Hospice-Hock Family Pavilion in Durham, NC after being in declining health for several months. Mr. Brotherton was born on September 28, 1935 in McDowell County, NC, son of the late Howard Franklin Brotherton and the late Pheba A. Vanzant Brotherton. He grew up in Erwin, TN, and then moved to New Port News, VA where he worked in the shipping yard, and finally settled down in the Danville area in 1967 when he started working for Goodyear Tire and Rubber Co. until his retirement after 30 plus years of service. Mr. Brotherton proudly served his country in the United States Army and was a member of the American legion Post 325. He was a member of the West End Christian Church “Disciples of Christ” where he served on the board, was a choir member and did various maintenance jobs for the church. He enjoyed bowling and golfing. On January 23, 1959, he married Mona Hensley Brotherton who survives of the residence. In addition to his wife, Mr. Brotherton is survived by daughter, Vivian B. Lawson of the residence; son, David Andrew Brotherton of Danville, VA; grandchildren, Brittany W. Mason (Mike), Drew Ambrose and Laura Ambrose; great grandchildren, Emma and Oliva Mason; brother, Charles “Sonny” Brotherton (Joyce) of Erwin, TN; and sister, Madeline Mathes (Thomas) of Erwin, TN. He was predeceased by two brothers Tommy Brotherton and Lee Roy Brotherton. A memorial service will be conducted on Wednesday, October 30, 2019 at 6:00 p.m. at the Wrenn-Yeatts Westover Chapel with the Reverend Catina Martin officiating. Military Honors will be conducted by the United States Army. The family will receive friends prior to the service from 5:00 p.m. to 6:00 p.m. at the funeral home and at others times will be at the residence, 402 Westview Drive, Danville, VA 24540. Wrenn-Yeatts Westover Chapel is respectfully serving the Brotherton family.

Carl James Brotherton, 84, of 402 Westview Drive, Danville, VA went home to be with his Lord on Saturday, October 26, 2019 at Duke Hospice-Hock Family Pavilion in Durham, NC after being in declining health for several months. Mr. Brotherton... View Obituary & Service Information

The family of Carl James Brotherton created this Life Tributes page to make it easy to share your memories.

Send flowers to the Brotherton family.