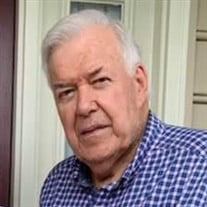 Carl Thomas Evans, 81, of Danville, went home to be with his Lord and Savior on Friday, February 5, 2021 after a brief decline in health. Carl was born on May 15, 1939 in Dry Fork, VA a son of the late Noel Clarence “Red” Evans and Annie Elizabeth Evans. He was a graduate of Spring Garden High School and received a Bachelor of Science Degree from Asbury College in Wilmore, KY. He completed his Master’s Degree in Education at the University of Virginia. He worked in the Pittsylvania County School System as a Teacher and Principal for 20 years. Later he spent 24 years as an Insurance agent for Nationwide Insurance Company before his retirement in 2004. He was an active member of Fairview United Methodist Church where he had served on several committees. He really enjoyed being a member of the Friendship Sunday School Class where he had served as an officer. He enjoyed hunting, fishing, and playing golf. Also, he was an avid fan of UVA sports. On June 12, 1966 he married his wife of 54 years, Alice Reece Evans. Survivors include his wife, Alice R. Evans, two daughters. Carla E. Adkins (Jack), Susan E. Gaines (Bill), a son, Stuart Evans (Tricia), three grandchildren, Wesley and Hayes Gaines, Nate Evans. He was predeceased by a sister, Alice Leigh Evans, and a brother, Rev. Larry Evans. Funeral services will be held on Tuesday, February 9, 2021 at 2:00 PM from the graveside at Danville Memorial Gardens conducted by the Rev. Stan Wright. In lieu of flowers, the family suggests that memorial donations be made to the Friendship Class of Fairview UMC 1013 Westover Drive Danville, VA 24541 or to the Danville Life Saving Crew 202 Christopher Lane Danville, VA 24541. Wrenn-Yeatts Westover Chapel is serving the Evans family.

The family of Carl Thomas Evans created this Life Tributes page to make it easy to share your memories.

Send flowers to the Evans family.