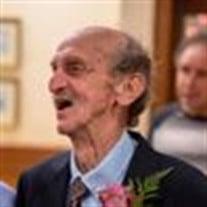 Charlie passed away in his home with his wife and daughter by his side on Sunday morning, July 19, 2020. Charlie was born on November 19, 1943 in Saltville, VA to the late Kefton Lee and Mamie Sweat Smith. He grew up in a large family of eight children, Georgia Smith Painter, Clifford (Buddy) Edward Smith (decd), Jack Selvin Smith (decd), Peggy Smith Harris, Hazel (Fern) Smith Harris, Howard Smith (decd), and Carolyn Smith Oakes. He graduated from R. B. Worthy High School in 1963. He immediately went to work for American of Martinsville to help take care of his parents and youngest sister. Then from 1965 to 1967 he was drafted and served in the United States Army. Charlie married Nancy Barbour on July 1, 1966. They had three daughters, Carol, Leigh and Christie and settled in Axton, VA. Charlie was a master wood craftsman with an unmatched work ethic and an avid farmer in his free time. He also loved and took care of his family. In the late 80’s Charlie and his wife started their own furniture business, “Charlie’s Frames”. They build it from the ground up and were in business until 2006. Charlie was always willing to help anyone in need and never met a stranger. He was a wonderful and devoted son, husband, father, grandfather, great grandfather, and friend. He will truly be missed by all that knew him. Charlie is survived by his wife, Nancy Barbour Smith; three children, Carol Smith Boothe and her husband, Christopher, Crystal Leigh Smith, and Catherine Christine Walters and her significant other, Billy Jarrell; nine grandchildren, Kristen Boothe Alagna and her husband Francesco, Danielle Boothe, Thomas Lee Pizzino, Frank-Leigh (Savannah) Hash, Sierra Grace Hash, Jonothan Jarrell, Brea Jarrell and Joshua Jarrell; five great grandchildren, Jonah, Oliver, Maddie, Aubrey and Paisley Jarrell; four sisters, Georgia (Toote) Smith Painter, Peggy Smith Harris, Hazel (Fern) Smith Harris, and Carolyn Smith Oakes; numerous nieces, nephews; and many loved ones. A celebration of life will be held on Saturday, July 25, 2020 at 5:00 p.m. at Anderson Chapel United Methodist Church with the Reverend Tom Blair officiating. Military honors will be conducted by the United States Army. At other times the family will be at the residence, 862 Sugar Barbour Road, Axton VA 24054. Flowers can be sent to his home on Sugar Barbour Road. Wrenn-Yeatts Westover Chapel is respectfully serving the Smith family.

Charlie passed away in his home with his wife and daughter by his side on Sunday morning, July 19, 2020. Charlie was born on November 19, 1943 in Saltville, VA to the late Kefton Lee and Mamie Sweat Smith. He grew up in a large family of eight... View Obituary & Service Information

The family of Charles "C.T." Smith created this Life Tributes page to make it easy to share your memories.

Charlie passed away in his home with his wife and daughter by...