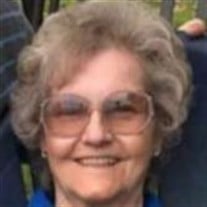 Doris Christine Gibson, 83, of 1649 Ringgold Road, Ringgold, VA went home to be with the Lord on Thursday, September 5, 2019 after being in declining health for the past several months. Mrs. Gibson was born Floyd, Virginia on June 25, 1936 a daughter of the late Maston H. Sowers and Evelyn Watkins Earles. She had lived most of her life in the Ringgold Community where she worked with her husband Sonny at the former Gibson’s Grocery and later Gibson’s Supermarket in Ringgold prior to becoming a full time homemaker. Mrs. Gibson was a member of the Lakewood Community Church where was a former choir member, member of the Willing Workers Sunday School Class and the Ladies Auxiliary of the church. On November 2, 1955, she married Gossie Evans (Sonny) Gibson Jr. who survives of the residence. Mrs. Gibson is also survived by one son, Duane Evans Gibson (Belinda) of Danville, VA, one daughter, Christi Gibson Motley (Rodney) of Keeling, VA, one brother, Ray Sowers of Danville, VA, four grandchildren & three great grandchildren. She was predeceased by one sister, Irene Shelton and two brothers, Richard Sowers and Paul Sowers. Funeral Services for Mrs. Gibson will be conducted on Sunday, September 8, 2019 at 3:00 p.m. from the Lakewood Community Church by the Reverend Ryan Call and Reverend Silas Seamster. The family will receive friends on Sunday at the Church from 1:30 to 3:00 p.m. and at other times; they will be at the residence, 1649 Ringgold Road, Ringgold, VA 24586. The family request that in lieu of flowers, memorial donations be made to the Ringgold Fire & Rescue, P.O. Box 10, Ringgold, VA 24586. Wrenn-Yeatts North Main Chapel is serving the Gibson family.

Doris Christine Gibson, 83, of 1649 Ringgold Road, Ringgold, VA went home to be with the Lord on Thursday, September 5, 2019 after being in declining health for the past several months. Mrs. Gibson was born Floyd, Virginia on June 25, 1936... View Obituary & Service Information

The family of Christine Gibson created this Life Tributes page to make it easy to share your memories.

Send flowers to the Gibson family.