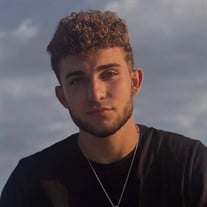 Colton Trey Poythress, 20, of 831 23rd Street South, Arlington, VA passed away on Wednesday, August 12, 2020, at his residence. He was born January 13, 2000, in Danville, VA. Colton spent his formative years in Danville and Charlotte, NC before moving to Arlington, VA in 2013. In Charlotte, he attended Selwyn Elementary School. In Danville he attended Forest Hills Elementary School and OT Bonner Middle School. A gifted athlete, he played youth baseball in Danville for the Redmen and Sliders teams. He played on the OT Bonner Braves Soccer team and while at Gunston Middle School, in Arlington, he played basketball for the Hornets and served as Quarterback for the Wakefield High School Freshman Football Team, leading the Warriors to an undefeated season in 2013. He was a 2018 graduate of Wakefield High School where he was a standout Football and Baseball player, serving as Captain for both squads. A pitcher and shortstop for the baseball team, he received Virginia High School League, All-State recognition in 2017. That season, as pitcher, Colton snapped a 20-year losing streak against rival Marshall High School, becoming the first Wakefield player to receive NOVA Baseball Magazine’s, “Player of the Week” honors. A three year starter as the varsity quarterback, he led the Warrior’s to their first district title in more than 40 years in 2016. His senior season was cut short due to an ACL tear in the second game. Following Graduation he attended Nation Christian Academy Prep School in Florida where he played football for the Eagles. He was scheduled to be an incoming freshman at Averett University this fall. He is survived by his parents, Cindy Martin Yeatts, Todd McGregor Yeatts and Christian Poythress, and four siblings: Cason Eli Poythress, Caine Sumner Poythress, Cara Caitlyn Poythress and Virginia Rebecca Yeatts. He is also survived by his Grandmother, Frances McGregor Yeatts; his Uncles, Troy Allen “Buddy” Martin, Donald Ricketts, and Steven Poythress; his Aunts, Susan Martin Moorefield, Paula Yeatts Ricketts, Kathryn Poythress Scearce and Sharan Poythress Simmons. A Celebration of Life Ceremony will be held at August 29th at in the Atrium of the Institute for Advanced Learning and Research, 150 Slayton Avenue – Danville, VA 24540. The service will take place from 3:00pm. In lieu of flowers, the family asks that donations be made to a fund established for a scholarship and memorial bench in Colton’s name: https://www.gofundme.com/f/colton-trey-poythress-memorial-fund?utm_source=customer&utm_medium=copy_link&utm_campaign=p_cf+share-flow-1

The family of Colton Trey Poythress created this Life Tributes page to make it easy to share your memories.

Send flowers to the Poythress family.