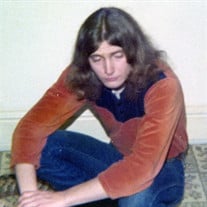 Douglas “Buck” Carlton Adams, Jr., 64, of Bedford, VA, died on Saturday, February 1, 2020, at Carriage Hill Retirement, after a decline in health for the past few months. Mr. Adams was born on July 26, 1955, in Augusta, GA, a son of the late Douglas Carlton Adams, Sr. and the late Geraldine Craig Adams. He spent most of his life in various areas of Virginia including Danville, Portsmouth, Blacksburg, and Bedford. He worked for Emerson Creek Pottery until his retirement. He was a man of few words; an artisan; and a craftsman. He was of the Christian Faith. Survivors include a son, Jarad Douglas Adams and wife Nicole, of Urbana, IL; a granddaughter, Parker Grace Adams; and two sisters, Fara A. Caldwell, of Mechanicsville, VA, and Lisa C. Adams, of Suffolk, VA. A graveside service in Schoolfield Cemetery will take place at a later date. Wrenn-Yeatts North Main Chapel is serving the Adams family.

The family of Douglas "Buck" Carlton Adams Jr. created this Life Tributes page to make it easy to share your memories.

Send flowers to the Adams family.