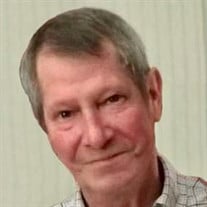 Earl McKinley Foley passed away on Monday, October 4, 2021, after recently celebrating his 70th birthday with family. Born on July 29, 1951, in Stuart, Virginia, he spent much of his life in Danville and was a graduate of Danville Community College where he obtained a certificate in electronics. Earl worked for many years laying carpet for Murphy Flooring and then as a machine operator for Intertape, from which he retired. Earl is survived by his three children, whom he said were his greatest achievements: Sharon & Clay Smith, Tammy Foley, and Wade & Chrissy Foley; his five grandchildren, Emma, Wade Jr., and Samantha Foley and Reagan & Macey Smith who all loved their “Papa Earl”. And his three brothers and best friends: Ralph Foley, Leon Foley, and Connie Foley. Earl was an enthusiastic fisherman and was happiest when fishing. He could talk for hours about his latest catch, or lack thereof, and often encouraged his children to join in on that fun. His other great passion was for UVA sports and while any of them would do, he particularly loved watching UVA basketball games. He wrote down every stat and could replay all important moments of college basketball from way back. It is a shear miracle that he did not die from excitement during the 2019 NCAA Tournament of which was probably one of the greatest days of his life when UVA finally won it all! Lastly, for those who knew him, Earl loved to tell stories. He often said his favorite way to spend his evenings were staying up late with his nieces solving the world’s problems and sitting at “The Garden” with his brothers drinking beer, talking all night, and playing horseshoes. Earl was blessed to have many good friends throughout his life, but one would be hard pressed to find a friend as loyal as Joe Davis. The family would like to thank Joe for his great friendship as well as taking such amazing care of Earl during his final year. In addition, for those of you who know Wanda Oakes Shields, you understand exactly why this amazing woman would be included in this tribune. Although previously his wife, there is no other angel and friend as faithful as Wanda who stood by his side to the very end. The family will be holding a private gathering in Danville on October 16, 2021. In lieu of flowers, the family request that memorial contributions be made to God’s Pit Crew, 2499 N. Main St., Danville, VA, 24540, or godspitcrew.org

Earl McKinley Foley passed away on Monday, October 4, 2021, after recently celebrating his 70th birthday with family. Born on July 29, 1951, in Stuart, Virginia, he spent much of his life in Danville and was a graduate of Danville Community... View Obituary & Service Information

The family of Earl McKinley Foley created this Life Tributes page to make it easy to share your memories.

Send flowers to the Foley family.