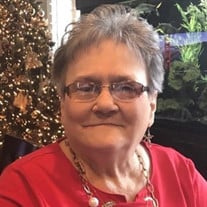 Earlene Collie Tate, 77, of 204 Nelson Avenue, Danville, VA, went home to be with the Lord on September 17, 2020, after being in declining health for the past several years. Earlene was born in Pittsylvania County on July 14, 1943, a daughter to the late Artie B. Collie and Susie Irby Collie. She had lived her entire life in Pittsylvania County and Danville where she was a homemaker. Earlene was a member of State Line Baptist Church. On December 28, 1961, Earlene married Harry Lee Tate, who died on March 31, 1991. Earlene is survived by two daughters, Kimberly T. Crews, of Danville, and Michelle T. Stewart and husband Ray, of Lake Wells, FL; one son, H.L. Tate and significant other, Michael Perez of Las Vegas, NV; a partner in life, Les Young, Jr, of Danville, VA; four sisters, Marie C. Yates of Stokesdale, NC, Thelma C. Yeatts, and husband Leon, of Java, VA, Yvonne C. Overbey, and husband Donnie, of Virgilina, VA, and Martha Collie, of Danville, VA; one grandchild, Jamie R. Crews; and two great grandchildren, Victor B. Crews and Jaycee R. Crews. She was predeceased by two brothers, David T. Collie and Artie L. Collie; and two sisters, Hazel Epperly and Lena Brumfield. Funeral services for Earlene will be conducted on Monday, September 21, 2020 at 2:00 p.m. from the Wrenn-Yeatts Westover Chapel by Pastor Carolyn Lewis. Interment will follow in Highland Burial Park. The family will receive friends at the funeral home on Sunday evening from 5:00 to 7:00 p.m. and at other times they will be at the residence of her daughter, Kim Crews, 196 Nelson Avenue, Danville, VA, 24540. Wrenn-Yeatts Westover Chapel is respectfully serving the Tate Family.

Earlene Collie Tate, 77, of 204 Nelson Avenue, Danville, VA, went home to be with the Lord on September 17, 2020, after being in declining health for the past several years. Earlene was born in Pittsylvania County on July 14, 1943, a daughter... View Obituary & Service Information

The family of Earlene Collie Tate created this Life Tributes page to make it easy to share your memories.

Send flowers to the Tate family.