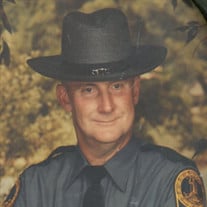 Edward Wayne “Ed” Chaney, of Chatham, VA died Wednesday, October 13, 2021 at SOVAH Health of Danville. Ed was born in Danville, VA on August 2, 1944, a son of the late Alex Chaney and Sally Parsons Chaney. He lived most of his life in Ringgold, VA before moving to Chatham, VA in 2010. Ed retired from the Virginia State Police Department after 21 years where he served as a State Trooper and as Chaplain. He was a member of Swansonville Pentecostal Holiness Church, the Virginia State Police Alumni, and Ringgold Fire and Rescue. Ed loved raising a garden, his tractors and his church. On July 27, 1988 he married Joyce Lewis Chaney, who survives. In addition to his wife, of the residence, he is survived by his children, Eddie Chaney (Elise), and Pam Chaney, both of Florida, Ricky Jones (Paula) of Chatham, VA, Alvin Jones, and Mike Jones (Emily), both of Danville, VA; a sister, Sallie Lee of Ringgold, VA; eight grandchildren, and several great-grandchildren, nieces and nephews. Ed was preceded in death by a son, Spencer Wayne Haymore, and by 4 brothers. Funeral services will be held on Saturday, October 16, 2021 at 2:00 P.M. at Swansonville Pentecostal Holiness Church with the Reverend Mike Hearp officiating. Interment will follow the service in Highland Burial Park. The family will receive friends on Saturday at the church from 1:00 until 2:00 P.M. Also, they suggest memorials may be made to the Callands Fire and Rescue, 11741 Callands Road, Callands, VA 24530 or to the Swansonville PHC Building Fund, 16300 Mount Cross Road, Dry Fork, VA 24549. Wrenn-Yeatts North Main Chapel is serving the Chaney family.

The family of Edward Wayne Chaney created this Life Tributes page to make it easy to share your memories.

Send flowers to the Chaney family.