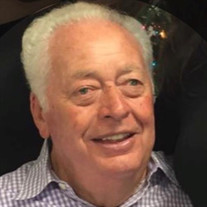 Edward Eugene (Ed) Dalton, 82, of 2060 Oak Grove Road, Keeling, VA went home to be with Lord on June 1, 2019 after being in declining health for the past several years. Ed was born in Pittsylvania County on December 26, 1936 a son to the late Mathew Bernard Dalton and Lucille Ferguson Dalton. He had lived his entire life in the Keeling community where he had retired from tobacco farming. Ed was a member of Oak Grove Baptist Church where he faithfully supported his church, the Keeling Fire Department and the Keeling community. He proudly served in the U.S. Air Force as an airplane mechanic. Ed liked to be called the “Mayor of Keeling”. Ed is survived by his loving wife, Prindle Clay Dalton of the residence, two daughters, Sandra W. Meyer (Billy), of Dry Fork, VA, Bonnie D. Roberts (Jack), of Danville, VA, one son, Randy Eugene Dalton (Michelle) of Keeling, VA, two step-daughters, Shelby Davis (Michael) of Phenix, VA, Sherry Trent of Keeling, VA, one step-son, David Trent of Phenix, VA, seven grandchildren, 15 great grandchildren & 10 step-grandchildren. Ed was predeceased by one son, Matthew Kay Dalton, a brother & sister in law, Roger Daniel Dalton and Margaret G. Dalton. Funeral Services for Ed will be conducted on Tuesday, June 4, 2019 at 7:30 p.m. from the Wrenn-Yeatts Westover Chapel by the Reverend Michael Myers and Reverend Rodney Dalton. The family will receive friends on Tuesday from 6:00 to 7:30 p.m. prior to the service. Interment will be conducted on Wednesday, June 5, 2019 at 11:00 a.m. in the Dalton Family Cemetery at Keeling, VA. with Military Honors conducted by the U.S. Air Force Honor Guard. The family will be at the residence, 2060 Oak Grove Road, Keeling, VA 24566. The family request that in lieu of flowers that memorial donations be made to the Keeling Volunteer Fire Department, P.O. Box 12, Keeling, VA 24566 or to the Oak Grove Baptist Church, Keeling , VA. Wrenn-Yeatts Westover Chapel is respectfully serving the Dalton family.

Edward Eugene (Ed) Dalton, 82, of 2060 Oak Grove Road, Keeling, VA went home to be with Lord on June 1, 2019 after being in declining health for the past several years. Ed was born in Pittsylvania County on December 26, 1936 a son to the late... View Obituary & Service Information

The family of Edward Eugene Dalton created this Life Tributes page to make it easy to share your memories.

Send flowers to the Dalton family.