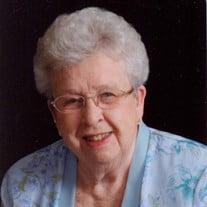 Ella Frances Hardie Ryan “Pud,” 89, of Brookdale Danville Piedmont and formerly of 210 Meadowbrook Drive, passed away Wednesday, September 25, 2019 after several years of declining health. Born April 30, 1930 in Harrisonburg, Virginia, she was the daughter of the late William Bryan Hardie and Marie Harris Hardie. Ella Frances and her family moved from Harrisonburg to Halifax County when she was a very young child. She was educated in the Halifax County Public Schools and was a graduate of Halifax County High where she served as the class president. She also graduated from Smithdeal-Massey Business College in Richmond, Virginia. It was there that she would meet the love of her life, John Clarence Ryan, Jr. John and Ella Frances were happily married for 50 years. It was his nickname for her of “Puddin’” that she became known “Pud” to many. He predeceased her on July 13, 2001. Over the years, Ella Frances enjoyed bowling, reading, playing Rook, watching Wheel of Fortune and lunches with her friends and family on Wednesdays. Mostly, she loved to travel and especially loved to shop until her health prevented her from doing so. One of her greatest joys was sending and receiving greeting cards to everyone. Ella Frances began her career as a receptionist for the Danville Social Services Bureau and was also a bookkeeper for her father-in-law’s textile factory in Milton, North Carolina. She later taught kindergarten for the Parks and Recreation Department at its Green Street and Third Avenue locations. When kindergarten was incorporated into the public schools, she faithfully served as a teacher’s aide first at Bellevue Elementary and then for many years at Forest Hills Elementary. It was from Forest Hills that she retired and was lovingly known as “Grandma” to its faculty and staff. Ella Frances was a faithful member of the Phebean Sunday School Class and Women’s Missionary Union at Keen Street Baptist Church. She became a member of United Baptist Church when Keen Street and Highland Park Baptist Church merged to form United Baptist. She was active at United Baptist until she was no longer physically able to attend. Ella Frances was predeceased by her brother, John William Hardie and his wife, Merlene of Halifax and a niece, Denise Hardie Monette. She was also predeceased by two brother-in-laws, Ervis Hall and Melvin Ryan. She is survived by her daughters, Diane Ryan Shelton and her husband, Kent, of Danville and Kimberly Ryan Clifton and her husband, Robert of Danville. She is also survived by twin grandsons, Andrew Lee Gardner of Mebane, NC and Phillip Ryan Gardner and his wife, Jessica, of Danville as well as her sister, Florine Hardie Hall of Danville, and a sister-in-law, “Boots” Ryan of Danville. Surviving her as well are many nieces and nephews, including Dr. H. Bryant Wilbourne (Jackie) of Greensboro, NC, who grew up along with her in her childhood home and whom she considers more as a younger brother than as a nephew. The family sends a special thank you to the Director and Staff of Brookdale Danville Piedmont for making the last year of Ella Frances’ life so enjoyable. A several times cancer survivor, Ella Frances was deeply troubled by the thought of any child having to endure the disease. It is her request that in lieu of flowers, contributions be made to the St. Jude’s Children’s Research Hospital at 262 Danny Thomas Place Memphis, TN 38105 or to a charity of your choice. Funeral services will be held on Friday, September 27, 2019 at 2:00 PM at Wrenn-Yeatts North Main Chapel with Dr. H. Bryant Wilbourne officiating. A private interment will follow at Highland Burial Park. The family will receive friends one hour prior to the service from 1:00 PM to 2:00 PM and other times at the residence of her daughter, Diane, at 201 Cathy Drive. Wrenn-Yeatts North Main is respectfully serving the Ryan family.

The family of Ella Hardie Ryan created this Life Tributes page to make it easy to share your memories.

Send flowers to the Ryan family.