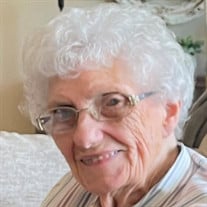 Elsie Louise Wagoner Woodson Nowlin, 88, of 152 Avalon Drive, Danville, VA, went home to be with her Lord on Sunday, June 5, 2022 at Riverside Health and Rehab after a decline in health for the last two and a half years. Elsie was born in Bassett, VA on September 22, 1933, a daughter of the late Beaufort T. Wagoner and Dovie Weddle Wagoner. She spent most of her life in the Danville area where she was a registered nurse. She first went to work for Dr. Updike and Dr. Turner, and then she went to work at Piedmont Prime Care, before she retired she was working as a school nurse at Stony Mill Elementary School. After her retirement, she became the honorary supervisor of Woodson Marathon, where she loved to greet customers, run errands and do a variety of other jobs at the gas station. She also loved to cook and share her baked goods with her family and customers. Elsie was a devout Christian. She was a member of Woodlawn Baptist Church, where she was involved with the Lady’s Ministry, served as chairman, sung in the choir, was a Sunday School teacher, a teller for the church, served on the Hostess Committee, and taught Bible School. She was also a member of La Sertoma, the ABWA and the Nursing Alumni Association. Elsie first married Lawrence Woodson, Sr. who died in September of 1984, she then went on to marry, Jack Nowlin who died in February of 1992. In addition to her parents, her first and second husband she was predeceased by her brothers, Eugene, Earnest, Elbert and Earl Wagoner. Survivors include her daughter, Kimberly W. Gatewood and husband, Randy of Danville, VA; her son, Lawrence Woodson, II and wife Ramona of Danville, VA; grandchildren, Ryan Gatewood (Rachel), Kory Gatewood (Kelly), Kevin Gatewood (Caroline), Trey Woodson and Seth Woodson; and her great grandchildren, Ella Gatewood, Grant Gatewood, Addison Gatewood, Weston Routh and Crew Gatewood. Funeral services will be conducted on Wednesday, June 8, 2022 at 11:00 AM at Woodlawn Baptist Church with the Reverend David Duncan and the Reverend Ryan Riley officiating. Interment will follow the service in Danville Memorial Gardens. The family will receive friends on Tuesday night from 6:30 PM to 8:30 PM at the church and at other times the family will be at the residence of her daughter, Kim Gatewood at 3188 Stony Mill Road, Danville, VA 24541 or her son, Lawrence Woodson, II at 1710 Buckhorn Drive, Danville, VA 24540. Memorial donations can be made to Woodlawn Baptist Church. Wrenn-Yeatts Westover Chapel is respectfully serving the family.

Elsie Louise Wagoner Woodson Nowlin, 88, of 152 Avalon Drive, Danville, VA, went home to be with her Lord on Sunday, June 5, 2022 at Riverside Health and Rehab after a decline in health for the last two and a half years. Elsie was born in Bassett,... View Obituary & Service Information

The family of Elsie Woodson Nowlin created this Life Tributes page to make it easy to share your memories.

Send flowers to the Nowlin family.