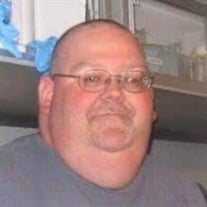 Ernest Reed Terry, 45, of 200 Swanson Ave, Danville died on Saturday, May 9, 2020 at Duke University after being in declining health for several months. Ernest was born in Danville on May 31, 1974, son of Ernest Lesley Terry and Beverly Ann Bowling Terry. He spent all of his life in the Danville area where he worked for Kroger for over twenty years before becoming an EMT. He then went on to work as an EMT for Virginia International Raceway until he retired due to his health. He was also the former fire chief of Mt Hermon Fire and Rescue for over 10 years. Ernest never met a stranger, he loved being a EMT and lived to serve and help people. He truly had a servant’s heart and had a dedication to put others before himself. He will be missed by all who knew him. In addition to his parents of Danville, Ernest is survived by a sister, Lesley Ann Terry of Danville; maternal grandmother, Doris Bowling of Danville; special cousin/brother, Michael Bowling; and numerous, uncles, aunts, cousins and friends. The family is aware that there are many people who would like to attend Ernest’s funeral, however, due to the constraints of public gatherings, there will be a private graveside service held at Danville Memorial Gardens with the Reverend Danny Campbell officiating. For the time being, the family encourages you to leave your memories and condolences online at www.wrenn-yeatts.com. The family will be at the residence of his parents, Ernest and Beverly Terry, 704 Brightwell Drive Danville, VA 24540. The family suggest that memorial donations be made to Mt Hermon Fire and Rescue, 4268 Franklin Turnpike Danville, VA 24540. Wrenn-Yeatts Westover Chapel is respectfully serving the Terry family.

Ernest Reed Terry, 45, of 200 Swanson Ave, Danville died on Saturday, May 9, 2020 at Duke University after being in declining health for several months. Ernest was born in Danville on May 31, 1974, son of Ernest Lesley Terry and Beverly Ann... View Obituary & Service Information

The family of Ernest Reed Terry created this Life Tributes page to make it easy to share your memories.

Send flowers to the Terry family.