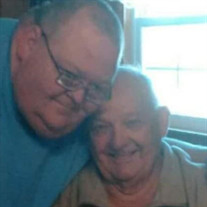 Ernest Lesley Terry, 87, of 704 Brightwell Drive, Danville, died on Wednesday, October 13, 2021 at Roman Eagle Rehabilitation and Health Care Center after a decline in health. Ernest was born in Halifax, VA on June 29, 1934, a son of the late John Coleman Terry, Sr. and Foy Thomas McCann Terry. He spent all of his life in the Danville area where he first worked for Johnsons Drug Store and then he went on to work as a store manager at the 7/11’s on Arnett Blvd and Kemper Rd. After they closed he worked as a supervisor for the Express Mart until his retirement. Ernest was a member of the Tabernacle for 48 years. In his spare time, he loved to cook various dishes, from lasagna to different kind of desserts. He also enjoyed decorating and making flower arrangements. On April 24, 1971, Ernest married Beverly Ann Bowling Terry who survives of the residence. They just had celebrated their 50th wedding anniversary this past April. In addition to his wife, Ernest is survived by his daughter, Lesley Ann Terry and her fiancé, Brad Dockery of Danville, VA; his brothers, Larry H. Terry and wife June of Danville, VA and Sam Terry of Richmond, VA; a special aunt, Ava Belle Martin of Lynchburg, VA; and numerous nieces, nephews and cousins. He was predeceased by his son, Ernest Reed Terry; and brothers, John Coleman Terry, Jr. and Cooper Terry. Funeral services will be conducted on Saturday, October 16, 2021 at 2:00 PM at the Wrenn-Yeatts Westover Chapel with the Reverend Danny Campbell officiating. Interment will follow the service in Danville Memorial Gardens. The family will receive friends prior to the service from 1:00 PM to 2:00 PM at the funeral home and at other times will be at the residence, 704 Brightwell Drive, Danville, VA 24540. Memorial Donations can be made to Gods Pit Crew. Wrenn-Yeatts Westover Chapel is respectfully serving the Terry family.

Ernest Lesley Terry, 87, of 704 Brightwell Drive, Danville, died on Wednesday, October 13, 2021 at Roman Eagle Rehabilitation and Health Care Center after a decline in health. Ernest was born in Halifax, VA on June 29, 1934, a son of the late... View Obituary & Service Information

The family of Ernest L. Terry created this Life Tributes page to make it easy to share your memories.

Send flowers to the Terry family.