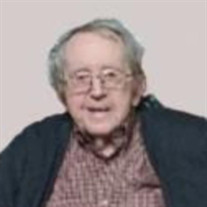 Garland W. Buckner, 94, passed away early Thursday, January 13, 2022 at Sentara Hospital in South Boston. Born on June 16, 1927 he was the fourth child of Alfred F. Buckner and Mildred Long Buckner. Mr. Buckner graduated from Turbeville High School in 1944. He was a proud veteran of both the United States Army and the United States Air Force. On December 31, 1949 he married the former Adelle Roberts, and they enjoyed 72 years of marriage. He was a longtime member of Laurel Grove Baptist Church, where he served as a Deacon and Sunday School Teacher, and immensely enjoyed singing in the choir. His passion was working on farm machinery, especially Ford tractors, and he operated his own repair shop, Kentuck Farm Service, finally retiring at age 80. He was known as “Buck” to his many customers and earned the reputation of Tractor Man. His hobbies included fishing and hunting with his bird dogs, Big John, Fancy Jane, and Sissy B. Mr. Buckner led a simple life, loving his family, animals, nature and the land. Every day when he blessed his meals he would ask God’s Blessings on his family- “every member of them, “all his friends and neighbors. He was wise and kind to everyone and never met a stranger. He was a patient and fair man who always tried to do the right thing and he took great pride in a job well done. He was predeceased by his parents, brothers, Edward Buckner (Katherine, deceased) and Julian (Billie, deceased) and his sister, Annie Mae B. Williamson (Frank, deceased). Survivors include his wife, Adelle Roberts Buckner, and his daughter, Ronda B. Barts (Don). He was adored by his grandsons, Gregory Barts, Stephen Barts (Jackie), and Daniel Barts (Jessica). Also surviving are the lights of his life, his four grandchildren, Cambell Barts, Taylor Barts, Charles Garland Barts, and Hannah Barts. Also surviving are several nieces and nephews. He was affectionately known as “Big Daddy” to his family and friends alike. He also loved his cat, Boo. Funeral services will be conducted on Saturday, January 15, 2022 at 11:00 AM by the Reverend Carl Burger from the graveside at Laurel Grove Baptist Church Cemetery with military honors by the American Legion Post #1097. Wrenn-Yeatts North Main Chapel is in charge of the arrangements.

The family of Garland W. Buckner created this Life Tributes page to make it easy to share your memories.

Send flowers to the Buckner family.