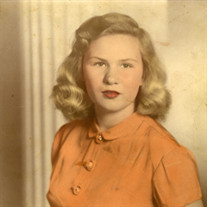 Geraldine Marie Morris Tate, 84 of Danville VA. left this earthly life on the morning of June 1, 2019. She was a life-long resident of Danville, born on March 1, 1935, and was the daughter of the late Whitt Lee Morris, Sr. and Thelma Christine Sarratt Morris. Geraldine married her life-long friend, Raymond Leonard Tate, on June 20, 1951, whom she had met as a one-year-old girl and he was six years old. Raymond and Geraldine were married almost 64 years until his death on April 8, 2015. Geraldine has now returned to Raymond, to whom she has missed each and every day for four years, with a broken heart. In addition to her parents and her husband, she was also predeceased by three brothers, Jack Morris, Bobby Morris, and Whitt Lee Morris, Jr. and her beloved aunt, Lena Morris Dillard. Geraldine Tate is survived by a sister, Betty Morris Travis, brother-in-law Herbert Travis, both of Java, VA. and a brother Garland Wayne Morris and sister-in-law Sandra Morris, both of Danville, VA. Geraldine is survived by three sons, Darrell Ray Tate and Kenneth Wayne Tate, both of Danville, VA. and Steven Tate and his wife Connie Tate of New Castle, VA. Geraldine is also survived by four grandchildren, Maleah Rose Tate of Amherst, VA. Emma Christine Harvey and husband Matt of Winnabow, NC. Adam Chappelle Tate of Lynchburg, VA. and Kayla Marie Tate of Evington VA. Also surviving are four great-grandchildren; Austin Shane Tate of Amherst, VA., Peytin Kapri Tate Ragland, Lukis Brennin Tate and Makenzly Grace McCormick, all of New Castle, VA. She is also survived by numerous nieces and nephews and friends, including a very special friend, Bobby Pruitt. Geraldine and Raymond Tate owned and operated the family-owned restaurant, Dairy Hart on Riverside Drive during the 1970’s and 1980’s . Geraldine Tate will perhaps be remembered as a devoted mother to her three sons, whom she encouraged to be good decent people. Funeral services will be held on Monday, June 3, 2019 at 2:00 PM at the Wrenn-Yeatts Westover Chapel conducted by the Elder Steven Tate with interment to follow in Highland Burial Park. The family will receive friends on Monday one hour prior to the service at the funeral home. Wrenn-Yeatts Westover Chapel is serving the Tate family.

Geraldine Marie Morris Tate, 84 of Danville VA. left this earthly life on the morning of June 1, 2019. She was a life-long resident of Danville, born on March 1, 1935, and was the daughter of the late Whitt Lee Morris, Sr. and Thelma Christine... View Obituary & Service Information

The family of Geraldine Morris Tate created this Life Tributes page to make it easy to share your memories.

Send flowers to the Tate family.