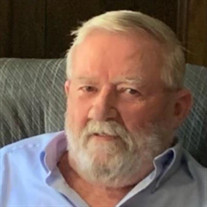 Glenn Cecil Moss, 75, of 3076 Vandola Rd., Danville Virginia, passed away on October 28, 2021. He was born in Danville on May 12, 1946, he was the son of the late Willie Robert Moss and Mabel Elizabeth Gammon Moss. Glenn attended Brosville High School and proudly served his country in the United States Army. Glenn was employed by Dan River Mills before joining the Army. After returning, he was a tobacco farmer in the Vandola Community where he and his brothers farmed for over 50 years. He enjoyed hunting, fishing, and gardening. Glenn was an excellent carpenter, often taking building projects in the off season. He was always available to help a neighbor in need and looked forward to visits from friends and his grandchildren. He is survived by his wife of 50 years, Vickie Evans Moss, his son Scott Moss (Hope) and daughter Elizabeth Ware (D.); four grandchildren, Lainey Moss, Colston Ware, Lauren Ware, and Will Moss. He is also survived by two sisters, Frances Taylor and Brenda Gammon (Benny); a brother, Willie Moss (Lottie); and his sister-in-law, Louise Moss; his friend from childhood, Clyde Scearce as well as numerous nieces and nephews. In addition to his parents, Glenn was predeceased by two brothers, Fred Moss and Joseph Moss and a brother-in-law, Ronald Taylor. The funeral service will be held on Sunday, November 7, 2021 at 2:00 pm at Vandola Baptist Church, Conducted by Dr. Scott Bortz. Interment will follow at the Moss Family Cemetery, Vandola Road. In lieu of flowers the family suggest that donations be made to the Bachelor’s Hall Volunteer Fire Department – 1301 Berry Hill Road, Danville, VA 24541 or the Moss Family Cemetery Fund- C/O Cynthia Parker- 1350 Randolph Drive, Keeling, VA 24566. Wrenn-Yeatts Westover Chapel is serving the Moss family.

Glenn Cecil Moss, 75, of 3076 Vandola Rd., Danville Virginia, passed away on October 28, 2021. He was born in Danville on May 12, 1946, he was the son of the late Willie Robert Moss and Mabel Elizabeth Gammon Moss. Glenn attended Brosville... View Obituary & Service Information

The family of Glenn Cecil Moss created this Life Tributes page to make it easy to share your memories.

Send flowers to the Moss family.