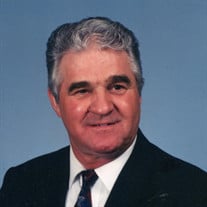 Guy Rice Nuckles, Jr., 84, of 400 Slayton Road, Sutherlin, VA went to his heavenly home on Saturday, September 4, 2021 after being in declining health for the past few months, but he is now at peace in the presence of the Lord. Guy was born in Amherst County, VA on May 21, 1937, a son of the late Guy Rice Nuckles, Sr. and Margaret Staton Nuckles. He spent most of his life in the Sutherlin community where he owned and operated Guy Nuckles Electric and Plumbing. He was a graduate of Dan River High School and he proudly served his country in the United States Air Force for over nine years. He was a member of Laurel Grove Baptist Church, where he was a deacon, Sunday school teacher and a member of the choir. He was also the groundskeeper at the church for 17 years. Guy lived a loving life with his family, his church and with his community. On August 2, 1959 he married Arlene Taylor, who survives of the residence. They were married for 62 years. In addition to his wife, Mr. Nuckles is survived by his children, Jeffery Nuckles, Curtis Nuckles, Donald Nuckles and his wife, Kathy, Melissa Stewart and her husband, Michael, and David Nuckles, all of Sutherlin, VA; and brother, Jimmy Nuckles and his wife, Barbara of Sutherlin, VA. He also leaves behind his grandchildren which knew him as “Paw Paw”, Jenny Nuckles, Haley Milam, Brittany Johnson, Jacob Stewart, Brandon Stewart, Riley Nuckles, Nolan Nuckles, Ava Nuckles, Jadyn Nuckles, Madison Nuckles and Maci Nuckles; and great grandchildren, Trevor Vernon, Sophie Osborne and Olivia Crumpton; his special friends, Garland Buckner, Sam Carter and J.B. Adkins; and several special nieces and nephews. He was predeceased by his parents; brother, Bobby Nuckles; sisters, Mary Parsons and Ann Ferguson (Roy); and niece, Stephanie Ferguson. Funeral services will be conducted on Wednesday, September 8, 2021 at 3:00 PM at Laurel Grove Baptist Church with the Reverend Carl Burger officiating. Interment will follow in the church cemetery with military honors by the United States Air Force and the American Legion Dan River Post 1097. The family will be at the residence, 400 Slayton Road, Sutherlin, VA 24594. Memorial donations can be made to God’s Pit Crew, Hurricane Ida Relief Fund at 2499 North Main Street, Danville, VA 24540 or to the American Heart Association at PO Box 417005 Boston, MA 02241. Wrenn-Yeatts North Main Chapel is respectfully serving the Nuckles family.

Guy Rice Nuckles, Jr., 84, of 400 Slayton Road, Sutherlin, VA went to his heavenly home on Saturday, September 4, 2021 after being in declining health for the past few months, but he is now at peace in the presence of the Lord. Guy was born... View Obituary & Service Information

The family of Guy R. Nuckles Jr. created this Life Tributes page to make it easy to share your memories.

Send flowers to the Nuckles family.