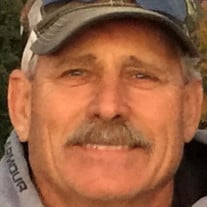 Henry Edwin Reynolds, 62, of 17389 Franklin Turnpike, Callands, VA, flew into the arms of Jesus on Friday, October 15, 2021 at Sovah Health in Danville, VA. Henry was born in Lynchburg, VA, on September 12, 1959, a son of Henry Lynwood Reynolds and the late Carlene Smith Reynolds Hunt. He spent all of his life in the Pittsylvania County area where he graduated from Chatham High School in 1978 and then went on to become the owner and operator of Reynolds Asphalt, Inc. He proudly served his country in the United States Air Force. He attended both Hollywood Baptist Church in Chatham, VA, and First Baptist Church, in Mount Dora, FL. Being an avid outdoorsman he enjoyed working on his farm, riding horses, fishing and hunting, especially out west. He was a former motocross rider, who also enjoyed car racing, boating, competitive road bikes, and snowboarding. Aviation was one of his biggest passions and he obtained his pilot’s license. Henry also enjoyed being on the water and enjoyed scuba diving and barefoot water skiing. On May 21, 1999 he married Suzanne Walker Reynolds, who survives of the residence. In addition to his father and wife, Henry is survived by his son, Jeromy Acie Reynolds (Lauren); daughters, Heather Bray (Sam) and Megan Blair (Brian); his grandchildren, twins Hadleigh and Caleb Bray, Braylee Blair, Shelton Blair, Harper Reynolds, twins Jacie and Tenley Reynolds and Wyatt Wray; sister, Kimberly Reynolds; niece, Abigayle Woodel; nephew, Justin Johnson (Emily); and his best friend and copilot, Buddy Mayhew. He was predeceased by his mother and a brother, Kyle Reynolds. A funeral service will be conducted on Monday, October 18, 2021 at 2:00 PM at Hollywood Baptist Church with Pastor Terry St. John officiating. Interment will follow in Highland Burial Park. The family will receive friends prior to the service on Monday from 1:00 pm to 2:00 pm and at other times will be at the residence, 17389 Franklin Turnpike, Callands, VA 24531. Memorial donations can be made to the Hollywood Baptist Church building fund or to Jason Bennett, Director Vet MX, 470 Movie Movers E, Axton, VA, 24054, www.veteranmx.com Wrenn-Yeatts North Main Chapel is respectfully serving the Reynolds family.

The family of Henry Edwin Reynolds created this Life Tributes page to make it easy to share your memories.

Send flowers to the Reynolds family.