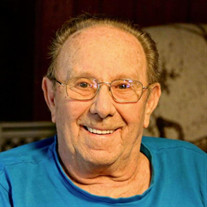 Herman Randolph Maxie, Sr., 87, of Danville, VA, died on Sunday February 28, 2021, at his residence, after a decline in health for the past four years. Mr. Maxie was born on June 19, 1933, a son of the late Lewis Guilford Maxie and the late Thelma Opal Ferguson Maxie. He spent all of his life in the Danville area where he retired from Dibrell Brothers, Inc. after twenty-five years of service. He was a veteran of the United States Army who proudly served his country during the Korean War. During his time in the Army he had the honor of meeting future President, Dwight D. Eisenhower. He was known for his expert marksmanship which proved to be an asset as he served his country. In his spare time, he loved fishing and traveling across the United States. He was a “jack of all trades” and was always ready to take on any home improvement tasks that him or his friends endeavored to complete. He will be remembered for always being ready to help others. He attended Piney Forest Seventh-Day Adventist Church. On December 1, 1956, he married the love of his life, Ruth Goggin Maxie, who survives of the residence. In addition to his wife, he is survived by a daughter, Karen Pickeral (Marvin); a son, Randy Maxie (Gail); four grandchildren, Amie Knowles (Kody), Chad Pickeral (Juanita), Chris Maxie (Lauren), and Jason Maxie (Emily); and two great grandchildren, John Pickeral and Colton Knowles. In addition to his parents, he was predeceased by a brother, Glenn Maxie. A funeral service will be held on Thursday, March 4, 2021 at 2:00 PM at the Wrenn-Yeatts Westover Chapel with Pastor Luis Beltre officiating. Interment will follow the service in Danville Memorial Gardens. The family will receive friends at the funeral home one hour prior to the service from 1:00 PM until 2:00 PM. Wrenn-Yeatts Westover Chapel is respectfully serving the Maxie family.

Herman Randolph Maxie, Sr., 87, of Danville, VA, died on Sunday February 28, 2021, at his residence, after a decline in health for the past four years. Mr. Maxie was born on June 19, 1933, a son of the late Lewis Guilford Maxie and the late... View Obituary & Service Information

The family of Herman Randolph Maxie Sr. created this Life Tributes page to make it easy to share your memories.

Send flowers to the Maxie family.