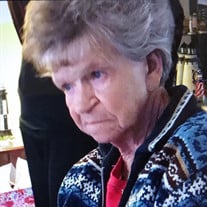 Hilda Jean Matherly Leigh, 84, of 120 Old Piney Forest Rd., Lot 52, Danville, VA, died unexpectedly on Saturday, April 18, 2020, at her residence. Mrs. Leigh was born in Pittsylvania County, VA, on September 6, 1935, a daughter of the late Charlie Watson Matherly and the late Sally Jane Norcuitt Matherly. She spent all of her life in the Danville area where she worked for Dan River Mills until her retirement. She attended Moffett Memorial Baptist Church. On May 17, 1980, she married William Luther Leigh, who died on August 27, 2006. She is survived by two daughters, Pamela McDowell (Carl Harville) and Sandra Wermann; two sons, David Guill (Jo) and Ronnie Guill; four grandchildren, Hunt Hedrick, Gerald Guill, Ronnie Guill, Jr., and Travis McDowell; and nine great grandchildren. In addition to her parents and husband, she was predeceased by fourteen siblings. The family is aware that there are many people who would like to attend Hilda’s funeral, however, due to the constraints of public gatherings during the COVID-19 outbreak, there will be a memorial service held at a later date. For the time being, the family encourages you to leave your memories and condolences online at www.wrenn-yeatts.com. Wrenn-Yeatts North Main Chapel is respectfully serving the Leigh family.

The family of Hilda Jean Matherly Leigh created this Life Tributes page to make it easy to share your memories.

Send flowers to the Leigh family.