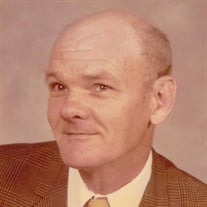 Howard Warren Haymes, Jr., 90, formerly of Milton Hwy, Ringgold, VA, died on Sunday, May 2, 2021 at The Newport Convalescent and Rehabilitation Center in Newport News, VA, after a decline in health for the past six years. Mr. Haymes was born in Danville, VA, on November 28, 1930, a son of the late Howard Warren Haymes, Sr. and the late Lucy Frances Dalton Haymes. He lived most of his life in the Danville area where he worked as a Loom Fixer for both Dan River Mills, Inc. and later Cone Mills in Greensboro, NC. He then went on to work for Booker Motor Company as a tractor mechanic. He was a veteran who proudly served his country in the United States Army; he was the 1,000th recruit in Danville, VA, for WWII, however the war ended before he saw combat. He was a member of Lakewood Community Church where he served on the Board of Stewards, taught Sunday School, drove the church van, and worked on the building upkeep. In his spare time, he loved photography and woodworking. On July 3, 1952, he married Annie Hazel Foley Haymes, who died on June 6, 2007. He is survived by a son, Paul Haymes and wife Linda, of Smithfield, VA; a daughter, Lucy Carolyn Haymes Stowe and husband Randall, of Yorktown, VA; five grandchildren, Sarah Butler and husband Tim, Karen Arnold and husband Chris, Randy Stowe, Michelle Diggs and husband Chris, and Christina Stowe; five great grandchildren, AnnieMae, Olivia, Isaac, Emerson, and Riley; and a sister, Frances Estes, of Yorktown, VA. A Funeral Service will be conducted on Saturday, May 8, 2021 at 2:00 PM at Lakewood Community Church with Pastor Ryan Call officiating. Interment will follow the service in the Haymes Family Cemetery with military honors conducted by the United States Army and the American Legion Post 1097 Honor Guard. The family will receive friends one hour prior to the service at the church and at other times will be at, 790 Milton Hwy, Ringgold, VA, 24586. Following the interment, the family would like to invite everyone to join them for a reception at Lakewood Community Church, Family Life Center. In lieu of flowers, the family suggests that memorial donations be made to Lakewood Community Church, 129 Clarks Mill Rd, Ringgold, VA, 24586. Wrenn-Yeatts North Main Chapel is respectfully serving the Haymes family.

Howard Warren Haymes, Jr., 90, formerly of Milton Hwy, Ringgold, VA, died on Sunday, May 2, 2021 at The Newport Convalescent and Rehabilitation Center in Newport News, VA, after a decline in health for the past six years. Mr. Haymes was born... View Obituary & Service Information

The family of Howard Warren Haymes Jr. created this Life Tributes page to make it easy to share your memories.

Send flowers to the Haymes family.