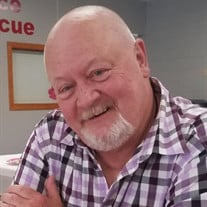 James Allen Clayton, 68, of Yanceyville, NC, went Home to be with the Lord, on Wednesday, December 23, 2020, at AthoraCare-Burlington Campus, after being in declining health for the past few months. Mr. Clayton was born in Providence, NC, on January 14, 1952, a son of the late Jesse James Clayton and Ruth Stowe Clayton, who survives. He spent all of his life in the Danville and Caswell County areas where he worked as a Tire Builder for Goodyear Tire and Rubber Company for over thirty years. He had a big heart, a bright smile, and he never met a stranger. He loved all people and made friends with everyone he met. He was very based in his Baptist Faith and love for the Lord. He also had a strong love for his family, especially his wife and grandchildren. On June 2, 1972, he married Janice Guthrie Clayton, who survives of the residence. In addition to his wife and mother, he is survived by two daughters, Rebecca Clayton Thompson (Korey), of Gibsonville, NC, and Melissa Clayton Duncan (Timmy), of Simpsonville, SC; three grandchildren, Avery Thompson, Lily Duncan, and Mac Duncan; two sisters, Robin Crooks, of Burlington, NC, and Sara Wells (Carlis), of Danville, VA; two brothers, Danny Clayton (Stacey), of Providence, NC, and Tony Clayton (Jenny), of Dewitt, VA; and numerous nieces, nephews, great nieces, and great nephews. In addition to his father, he was predeceased by his father-in-law and mother-in-law, Malcolm and Helen Guthrie. A memorial service will be held at a later date. Wrenn-Yeatts Memorial Funeral Home, Yanceyville, NC, is respectfully serving the Clayton family.

James Allen Clayton, 68, of Yanceyville, NC, went Home to be with the Lord, on Wednesday, December 23, 2020, at AthoraCare-Burlington Campus, after being in declining health for the past few months. Mr. Clayton was born in Providence, NC,... View Obituary & Service Information

The family of James Allen Clayton created this Life Tributes page to make it easy to share your memories.

Send flowers to the Clayton family.