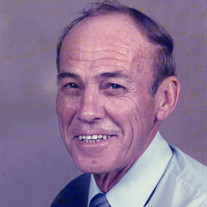 James Henslie (Handsome) Ferguson, 88, of 336 Airport Road, Ringgold, VA went home to be with his Lord on Wednesday, February 19, 2020 after being in declining health for the past year. Mr. Ferguson was born on June 30, 1931 in the Sutherlin Community of Pittsylvania County a son of Howard Henslie Ferguson and Gray Brown Ferguson. He had lived all of his life in Pittsylvania County with the majority of it in the Mountain Hill Community on Airport Road. James was a graduate of Dan River High School and then was a graduate of Graduate School. He had retired from the J.W. Squire Floor & Tile Company after 42 years as an installer. James was a very active member of Williamson Memorial Presbyterian Church where he had served as Sunday School Superintendent, Deacon, Elder, taught Sunday School, choir member and he did a lot of the church maintenance. He had a passion for fishing, and he was very musically inclined. James served with the U.S. Navy in Iceland during the Korean War. On December 20, 1951 James married the love of his life, the late Barbara Jean Sigmon Ferguson who died on April 25, 2011. James is survived by his three children, James Wayne Ferguson (Faye) of Ringgold, VA, Velva Gaye F. Tate (Ricky) of Keeling, VA, Barry Howard Ferguson (Kim) of Clarksville, VA, one brother, J.D. Ferguson, four sisters, Mildred F. Whitt, Emporia, VA, Margaret F. Reynolds, Chester, VA, Lois F. Kent (Steve) of Danville, VA & Barbara Jean Whittaker, Maryland, four grandchildren & 8 great grandchildren. He was predeceased by two brothers, Thomas & Kent Ferguson & one sister Doris Ferguson Tate. Funeral Services for James will be conducted on Saturday, February 22, 2020 at 2:00 p.m. from the Graveside in Floral Hills Memory Gardens with the Reverend Michael Dudley officiating. Military Honors will be conducted by the U.S. Navy Honor Guard. The family will receive friends at the residence, 336 Airport Road, Ringgold, VA 24586. Wrenn-Yeatts Westover Chapel is respectfully serving the Ferguson family.

James Henslie (Handsome) Ferguson, 88, of 336 Airport Road, Ringgold, VA went home to be with his Lord on Wednesday, February 19, 2020 after being in declining health for the past year. Mr. Ferguson was born on June 30, 1931 in the Sutherlin... View Obituary & Service Information

The family of James "Handsome" Ferguson created this Life Tributes page to make it easy to share your memories.

Send flowers to the Ferguson family.