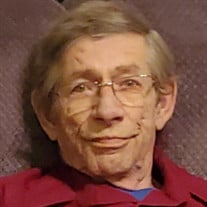 James, AKA Dad, Lil Papa, or Popie, 77, of 244 Parkland Drive, Danville, Virginia, left behind his precious family and gained his angel wings on Sunday, June 5, 2022. James was born on November 23, 1944, in Danville, Virginia, to the late James Ellison Gibson, Sr. and the late Evelyn Jones Gibson. He retired from Unique Industries, and he worked many years at Dan River Mills until they closed, On July 30, 1966, he married the love of his life, Sue Carol Francis Gibson. They were married for 44 years before Sue passed away on December 21, 2010. Out of 44 years of marriage God gave them 2 sons that they both loved dearly; Kevin and Kenneth Gibson and they gained 2 daughters that they adored; Nicole and Kimberly Gibson. He was survived by his precious grandchildren that were the apple of his eyes; Kaleb, Haley, Bentley, and Nova Grey Gibson and Bryan Walker. He also had a grand-dog, Oreo, that he loved very much. He was also survived by his sister, Irene Smith and his brother, John Gibson (Pat), and his brothers-in-law, John Francis (Tricia) and Mike Francis and many nieces and nephews. James loved his Nascar racing where he spent a lot of Sundays in front of the TV with his son Kenny watching and cheering for his all-time favorite driver Dale Earnhardt. He later became a Jimmy Johnson fan. He also loved his old country music and he loved going to see Old Skool perform, which is the band that his son Kevin is the rhythm guitarist in. In addition to his parents and his wife, he was also predeceased by a son, Phillip Corey Gibson, a sister, Frances Barbour, and a niece, Kim Pennington. A memorial service will be held Sunday, June 12, 2022, at 6:00 PM at Wrenn-Yeatts North Main Chapel, officiated by the Reverend Wade Rowland. The family will receive friends an hour prior to the service and other times at the residence, 244 Parkland Drive, Danville, VA, 24540. A livestream of the service will be viewable at the time of the service via the following link: https://youtu.be/p3iQhUIxiRk Wrenn-Yeatts North Main Chapel is respectfully serving the Gibson Family.

James, AKA Dad, Lil Papa, or Popie, 77, of 244 Parkland Drive, Danville, Virginia, left behind his precious family and gained his angel wings on Sunday, June 5, 2022. James was born on November 23, 1944, in Danville, Virginia, to the late James... View Obituary & Service Information

The family of James Ellison Gibson, Jr. created this Life Tributes page to make it easy to share your memories.