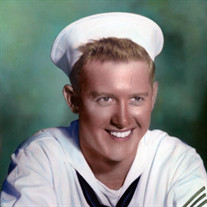 James Edward “Ed” Harville, 81, of Pelham, NC, died Friday, February 5, 2021 at Riverside Health and Rehabilitation Center after a decline in his health for the past six months. Ed was born in Danville, VA, on June 10, 1939 a son of the late James Washington Harville and Essie Eanes Harville. He lived most of his life in Danville and his later years in Pelham, NC. Ed retired from APAC Thompson–Arthur Paving Company where he worked as a motor grader operator. He was of the Methodist faith and a member of the Elks Lodge and a member of the Improved Order of the Redmen. He enjoyed fishing and music. Ed was a veteran, proudly serving in the U.S. Navy. Survivors include a daughter, Anne Marie Carver (Tom) of Powder Springs, GA; two sisters, Martha Clark (Billy), and Madeline Morris (Neal), both of Danville, VA; three brothers, Fred W. Harville, Coy E. Harville (Jean), both of Danville, VA, and Ricky Harville, Winston-Salem, NC; three nephews and five nieces also survive. A graveside service will be held on Tuesday, February 9, 2021 at 2:00 P.M. at Danville Memorial Gardens with the Reverend Larry Durham officiating. Military honors will be conducted by the U.S. Navy. Wrenn-Yeatts Westover Chapel is serving the Harville family.

The family of James Edward Harville created this Life Tributes page to make it easy to share your memories.

Send flowers to the Harville family.