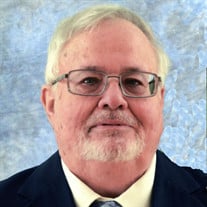 James “Jim” Hogan, age 73 of 1260 Ringgold Church Road, Ringgold, Virginia, went to his Eternal Home on September 26, 2019 at Sovah Health, Danville following a four day illness. The only child of Louise Elliott Hogan and Ovid Ramsey Hogan (both deceased), he was happily married to his wife Margaret Burks Hogan for almost 53 years. Survived by his wife of the residence, their children, Jennifer Hogan Macleod and Jessica Lynne Hogan, and three beloved grandsons, Weston O. Kihlmire, and James M.A. Richardson and Zachary T.E. Richardson, all of Danville. He also leaves behind a spoiled beagle named Belle, who acted as his shadow for the last 11 years. Jim was born in Danville, Virginia and spent most of his life in Ringgold, Virginia, was a graduate of Dan River High School, and attended VPI Extension in Danville, Virginia. He Began his working career as a telephone lineman at C&P Telephone Company and later became an over the road truck driver for many years. He moved on to work at Womack Electric Company and retired after 20 years. A man who never met a stranger, one of Jim’s biggest joys in life was helping other people in any way that he could. He actively volunteered for his entire life, including work at Kentuck Volunteer Fire Department, God’s Storehouse and God’s Pit Crew of Danville. He was a Lifetime Member of the Danville Life Saving Crew, having reached the level of Paramedic and past President of the DRMC Auxiliary. He was a longtime Master Mason in the Ramah Lodge before it disbanded, and continued in Roman Eagle Lodge No. 122. He was also a proud member of the Scottish Rite of Freemasonry, as well as a member of the Improved Order of Red Men, Poquoson Tribe 124. A man of deep Christian faith, he was a member of Hillcrest Baptist Church in Danville, VA. Wrenn-Yeatts Funeral Home North Main Chapel is respectfully serving the Hogan family. The family will hold a private memorial service at a later date. It is requested that in honor of Jim’s love of giving, donations be made to any favorite charity in lieu of flowers. Online condolences at www.wrenn-yeatts.com

The family of James "Jim" Edward Hogan created this Life Tributes page to make it easy to share your memories.

Send flowers to the Hogan family.