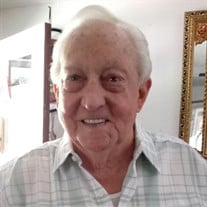 James R. “Jimmy” Lewis, 78, of 500 Iris Ln., Danville, VA, died on Friday, October 4, 2019, at Moses Cone Hospital, Greensboro, NC, after being in declining health for the past six months. Mr. Lewis was born on December 7, 1940, in Dry Fork, VA, a son of the late Willie Thomas Lewis and the late Emma Giles Lewis Mills. He spent most of his life in Sutherlin, VA, and worked as a salesman for Motley’s Auto World for over thirty years. He was a member of the Church of Truth. He loved spending time with his family, riding his ATVs and motorcycle, and attending demolition derby. On September 24, 2019, he married Linda Ashley Lewis, who survives of the residence. He is survived by a son, James Russell “Rusty” Lewis, Jr. (Monica), of Pelham, NC; three grandchildren, Amber Krammer (Brandon), Crystal Lewis (Todd), and James R. “Rusty” Lewis, III. (Sierra); seven great grandchildren, Starleigh, Rayne, Izzy, Brandon, Blair, Bayleigh, and Sophia; two brothers, Barry Lewis (Linda), of Danville, VA, and Terry Lewis (Dee), of Winston-Salem, NC; and a sister, Joyce Chaney (Ed), of Danville, VA. In addition to his parents, he was predeceased by his first wife, Martha Ann Robertson Lewis, who died on April 10, 2015; and three brothers, Ray Lewis, WT Lewis, and Johnny Lewis. Funeral services will be conducted on Wednesday, October 9, 2019 at 2:00 p.m. at the Wrenn-Yeatts Westover Chapel with the Rev. Kyle Preskitt and the Rev. Steve Johnson officiating. Interment will follow the service in Danville Memorial Gardens. The family will receive friends Tuesday night from 7:00 p.m. to 8:30 p.m. at the funeral home and at other times will be at the residence. In lieu of flowers, the family suggests memorial donations be made to the Church of Truth, 415 Franklin Turnpike, Danville, VA, 24540. Wrenn-Yeatts Westover Chapel is respectfully serving the Lewis family.

The family of James R. "Jimmy" Lewis created this Life Tributes page to make it easy to share your memories.

Send flowers to the Lewis family.