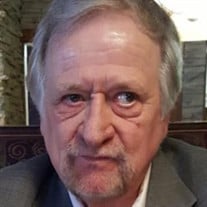 John Miller Andrews, Sr., of Danville, VA., died on Monday, March 7, 2022 at SOVAH Health-Danville. Mr. Andrews was born in Danville, VA, on October 9, 1942, a son of the late F. Miller Andrews and the late Ruby Lumpkin Andrews. John spent most of his life in the Danville area. His career took him around Virginia and to California and Florida where he worked as a self-taught computer technician. His greatest satisfaction was from helping others and making new friends wherever he traveled. He attended Peaceful Baptist Church. He was married to Sunny Andrews, who survives of the residence. In addition to his wife, he is survived by three sons, Kelvin Andrews, Spencer Andrews, and Alex Andrews; three daughters, Pamela Andrews DeWolf, Tasha Andrews, and Annamarie Bailey; a step-son, Jeffrey Scearce; nine grandchildren; a brother, Daniel Andrews; and a sister, Mason Hutson. A Funeral Service will be held on Friday, March 11, 2022 at 2:00 PM at the Wrenn-Yeatts Westover Chapel with Pastor Rick Harbour and Brother Jeffrey Scearce officiating. Interment will follow the service in Highland Burial Park. The family will receive friends at the funeral home one hour prior to the service. In lieu of flowers, the family suggests that memorial donations be made to Peaceful Baptist Church, 1132 Berry Hill Rd., Danville, VA. Wrenn-Yeatts Westover Chapel is serving the Andrews family.

The family of John Miller Andrews Sr. created this Life Tributes page to make it easy to share your memories.

Send flowers to the Andrews family.