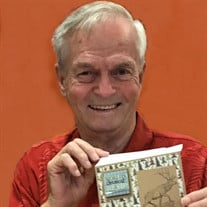 John David Lewis, 88, of Danville, VA, died unexpectedly from complications of COVID-19, on Monday, September 20, 2021, at SOVAH Health-Danville. Mr. Lewis was born in Pittsylvania County, VA, on May 20, 1933, a son of the late Charles Cabel Lewis and the late Myrtle Simmons Lewis. He lived all of his life in the Danville area where he worked for the United States Postal Service as a mail carrier. After retiring from the postal service, he owned and operated Bill’s Diner in Chatham, VA. He was a veteran who proudly served his country for four years in the United States Navy. He was a member of Forest Lawn Baptist Church. In his spare time, he enjoyed deer hunting, playing bridge, and traveling with his fellow camping club members. He was also an archery enthusiast, winning several tournaments over the years. On March 27, 1959, he married Norma Geraldine Robertson Lewis, who survives. In addition to his wife, he is survived by a daughter, Dawn Jones (Jim); a son, Tony Lewis; two grandchildren, Candace Light and Zachary Lewis, all of Danville, VA; a brother, Paul Lewis (Barbara), of Myrtle Beach, SC; and several nieces and nephews. In addition to his parents, he was predeceased by seven brothers and one sister. A graveside service will be held on Friday, September 24, 2021 at 11:00 AM at Danville Memorial Gardens with Pastor Tim Rogers officiating. In lieu of flowers, the family suggests that memorial donations be made to the Danville Life Saving Crew, 202 Christopher Lane, Danville, VA, 24541. Wrenn-Yeatts Westover Chapel is serving the Lewis family.

John David Lewis, 88, of Danville, VA, died unexpectedly from complications of COVID-19, on Monday, September 20, 2021, at SOVAH Health-Danville. Mr. Lewis was born in Pittsylvania County, VA, on May 20, 1933, a son of the late Charles Cabel... View Obituary & Service Information

The family of John David Lewis created this Life Tributes page to make it easy to share your memories.

Send flowers to the Lewis family.