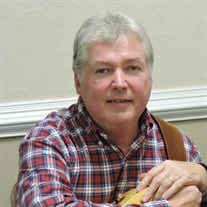 On Thursday afternoon, December 31, 2020, Heaven was in need of another musician. This is when our Lord called John David Owen to his Heavenly Home. Born on September 2, 1959 in Halifax County, VA, John was the youngest of six boys, with the sister being the youngest of the seven children. John was the son of the late Wilford Grayson Owen & Helen Shelton Owen. He was a retired plant superintendent of Southern Processors, Inc., but most importantly, he was a loving Husband, Father, brother, and friend. He was a faithful member of Woodlawn Baptist Church where he helped lead worship services with his voice and guitar. On September 28, 1996, he married his loving wife, Rhonda Hylton Owen, who survives of the residence. Survivors also include his sons, Patrick Shane Owen of Ringgold, VA; Joshua Reagan Owen of the residence; brothers, Frank Owen of Chester, VA; Jerry (Vickie) Owen of Providence, NC; James Owen of Ringgold, VA; Paul Owen of Ringgold, VA; sister, Judy Marie Owen, Danville, VA; sister-in-law, Elinor Owen of Richmond, VA. Along with his parents, his eldest brother, Preston Owen, predeceased John. Starting out at the young age of six, his father introduced him to the guitar, from where his passion grew. His love for music led him to be proficient in learning how to play anything he desired. Aside from his musical gifts, he was a man of many other talents. If John could not fix it, he would study the problem, give old YouTube a search, and before you knew it, things were fixed and back in operation. This humble man of many talents and much love will be greatly missed. In the future, when you hear the fleeting notes of “Stairway to Heaven” or another favorite rock song, take comfort in knowing that it is Johnny-Buck hitting a few licks on his heavenly guitar. Funeral services will be held on Monday, January 4, 2021at 2:00 PM at Woodlawn Baptist Church, conducted by the Reverend Curtis Faison and Mr. Bobby Shields. Interment will be at the Hylton Family Cemetery. The family will receive friends at the residence. In lieu of flowers, the family suggests that Memorial donations be made to Woodlawn Baptist Church, 2500 Westover Drive, Danville VA, or God’s Pit Crew and Danville Life Saving Crew. Wrenn-Yeatts Westover Chapel is serving the Owen family.

On Thursday afternoon, December 31, 2020, Heaven was in need of another musician. This is when our Lord called John David Owen to his Heavenly Home. Born on September 2, 1959 in Halifax County, VA, John was the youngest of six boys, with... View Obituary & Service Information

The family of John David Owen created this Life Tributes page to make it easy to share your memories.

Send flowers to the Owen family.