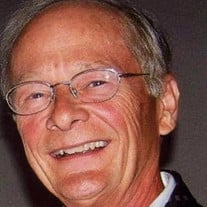 John “Jack” Crawford Tomer, died on Sept 23, 2020, after a year-long, courageous battle with acute myeloid leukemia. Jack was born in Akron, Ohio on March 3, 1948. He is predeceased in death by his parents, Robert and Genevieve Tomer and brothers Gary and Jeff Tomer. Jack is survived by his wife, Donna Jennings Tomer, his two children: Donnamarie Tomer Nobili and husband Tony, Adam Tomer and wife Robin, and stepsons Michael Adkins and wife Beth and Matthew Adkins and wife Megan and his brothers Randy Tomer along with wife Paula and Rob Tomer along with wife Sandy. More than anything, Jack was a proud and devoted grandfather to Harmon Nobili, Reed Nobili, Bayne Nobili, Ada Tomer, Rose Tomer, Kolton Adkins, Noah Adkins, Harper Adkins and Payton Adkins. Papa, as they called him, loved them “to the moon and back.” A loving family man, Jack was the type of father and grandfather that never missed a ball game, dance recital or special event in their lives. He was the type of husband that enjoyed being by his wife’s side, whether it was on a chair next to the ocean or talking as the sun set on their back porch. Jack’s love for his family was unconditional. Though leukemia may have taken his body, it could never take the love that created a lifetime of memories. Jack was a graduate of Ellet High School in Akron, Ohio. He served in the Army during the Vietnam War, stationed in Okinawa. In Danville, he worked at Goodyear Tire & Rubber Company in the Maintenance Department for 28 years and after his retirement he worked as Maintenance Manager for 5 years at AW North Carolina . A private graveside service will be held for the family. The family will receive friends at the home, 561 Rocky Knoll Lane, Danville, Virginia. In lieu of flowers, remembrances may be made to The Joseph and Jeannette Silber Hope Lodge, 11432 Mayfield Road, Cleveland, OH 44106-2364, 216-844-4673(HOPE). The Hope Lodge held a special place in Jack’s heart because it enabled him and family housing while he underwent bone marrow treatment at the Cleveland Clinic. The family wants to send a special Thank you to Commonwealth Hospice, Jennifer Allen, Frankie Neal and Laura Swift, and Pastor Daryl Joyce. Wrenn-Yeatts Funeral Home, Westover Chapel is respectfully serving the Tomer family.

John &#8220;Jack&#8221; Crawford Tomer, died on Sept 23, 2020, after a year-long, courageous battle with acute myeloid leukemia. Jack was born in Akron, Ohio on March 3, 1948. He is predeceased in death by his parents, Robert and Genevieve Tomer... View Obituary & Service Information

The family of John "Jack" Crawford Tomer created this Life Tributes page to make it easy to share your memories.

Send flowers to the Tomer family.