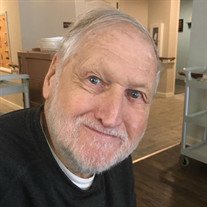 Joseph W. Sanford, Sr., “Bill”, 91, of Danville, VA, died on Monday, February 22, 2021 at SOVAH Health-Danville after a decline in health for the past few years. Bill was born in Henrico County, VA on April 14, 1929, a son of the late Purcell Bertran Sanford and the late Mary Louise Butler. He had lived in the Danville area since 1967 where he worked for the former C&P Telephone Company, until his retirement in 1984. He was a member of Riverview Baptist Church where he served as an audio technician. He was a veteran of the United States Marines who proudly served his country in the Korean War. On April 30, 1953, he married Lois Richie Sanford, who predeceased him on September 27, 2011. He is survived by two sons, Joseph W. Sanford, Jr. and wife Marietta, of Danville and Nelson B. Sanford and wife Lori, of Columbus, OH; a daughter, Leslie Ingram and husband David, of the Brosville community; four grandchildren, Jennifer Ingram Moss and husband Jayson, Matt Ingram and fiancée Mirina Baylee Stephens, Will Sanford and wife Leigh, and Ryne Sanford; and three great grandchildren, Katelyn Moss, Bryson Moss, and McKinley Jane Ingram. In addition to his wife and parents, he was predeceased a daughter, Robin G. Powell; and a sister, Shirley Palmer. A Funeral Service will be held on Saturday, February 27, 2021 at 1:00 P.M. at Riverview Baptist Church with Pastor Daniel Custer and Pastor Duane Blevins. Interment will follow the service in Danville Memorial Gardens. The family will receive friends Friday night at the church from 6:00 PM until 7:30 PM. The family suggest that in lieu of flowers, memorial donations be made to Riverview Baptist Church, 523 Park Ave, Danville, VA, 24541. Wrenn-Yeatts Westover Chapel is serving the Sanford family. Online condolences may be made www.wrenn-yeatts.com.

The family of Joseph Bill Sanford Sr. created this Life Tributes page to make it easy to share your memories.

Send flowers to the Sanford family.