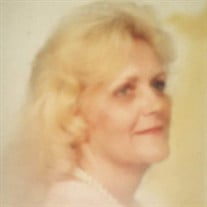 Joyce Mae Smith Adkins, 75, of Danville, VA died Friday, September 3, 2021 in Eden, NC, after being in declining health since 2015. Joyce was born in Danville, VA, on July 29, 1946, a daughter of the late Horace Henry Smith and Frances Mae... View Obituary & Service Information

The family of Joyce Smith Adkins created this Life Tributes page to make it easy to share your memories.

Send flowers to the Adkins family.