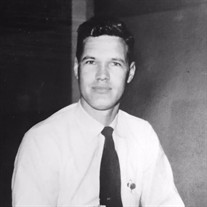 Julian Glenwood Tucker, 94, of 134 Elon Place, Danville died Sunday, February 24, 2019 at SOVAH-Danville. He was born February 5, 1925 in Danville, a son of Elvin Clark Tucker and Elizabeth Wilborn Tucker. Mr. Tucker served his country first in the Navy and later the Air Force retiring after 20 years of service. He worked as an electrician for Corning Glass, retiring after 20 years of service. Mr. Tucker was a member of Trinity United Methodist Church, the American Legion Post 325 (Life member) and the Improved Order of Red Men, Poquoson Tribe No. 124. On February 4, 1961 he was married to the former Belva Lynch, who survives. In addition to his wife, of the residence, he is survived by a son, Gary A. Tucker and wife, Mary of Danville; a daughter, Pamela Dawn Tucker of Cincinnati, OH; and four grandchildren, Miranda Estep, Caroline Tucker, Rose Tucker and Anna Tucker. His parents, a sister, Ella Mae Tucker and two brothers, Leroyall Tucker and Thomas Tucker, preceded him in death. Funeral services will be conducted on Wednesday, February 27, 2019 at 2:00 p.m. from the Wrenn-Yeatts Westover Chapel by the Reverend Bobbie Henley and the Reverend Gary A. Tucker. Interment will follow in Danville Memorial Gardens with full military honors by the U.S. Army. The family will receive friends at the funeral home for an hour prior to the service and at other times at the residence. Memorials contributions to Trinity United Methodist Church or to God’s Pit Crew. Wrenn-Yeatts Westover Chapel is serving the Tucker family.

The family of Julian G. Tucker created this Life Tributes page to make it easy to share your memories.

Send flowers to the Tucker family.