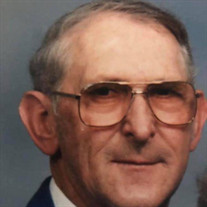 Julian Wade Walton, 96, of 500 Kerns Church Road, Sutherlin, VA went home to be with the Lord on Tuesday, December 8, 2020. He was born November 16, 1924 in Sutherlin, Virginia on the family farm, he was a son of the late Beverly Wade Walton and Beatrice Walke Walton. He served proudly in the US Army in World War 11 as a part of General Patton’s division as they pushed through Germany and later served as a guard during the Nuremberg Trials. He was a 70-year member of Kent Masonic Lodge, a member of VFW Post 647 and a Life Member of American Legion Post 325. He was a member of Kentuck Baptist Church for many years where he served as a deacon and treasurer of the Fellowship Class. Julian loved farming the land he grew up on as well as working as a pipe fitter in Dan River Textile Mills until his retirement. He was married to Florence Ferguson in March 1947 until her death in 1956. He married Rubye Finch Nuckols in 1957 and shared 62 happy years with her until her death in June 2020, square dancing, traveling and raising a family. Julian was a special and loving husband, father and grandfather Pa-Pa to his grandchildren. He is survived by two daughters, Carolyn N. Borgwardt and Margaret Nuckols-Currence (Joe); four grandchildren, Joshua Ladd Borgwardt (Jeanna), Sarah B. Joyner (Jesse), Brooke A. Currence and Joanna C. Eagan (Tim) and four great-grandchildren, Kezzie, Annie, David and Wade; a brother, Irvin D. Walton (Ann) and a sister Ruth W. Jackman. He was predeceased by one sister, Nancy E. Walton. The family would like to express special gratitude to the personal caregivers who provided loving care to Julian and Rubye. Funeral services will be held on Saturday, December 12, 2010 at 1:00 P.M. from the graveside at Highland Burial Park, conducted by the Reverend Allen Mahan. In lieu of flowers the family suggest memorial contributions to Kentuck Baptist Church 1845 Kentuck Church Road, Ringgold, VA 24586. Wrenn-Yeatts North Main Chapel is serving the Walton family.

Julian Wade Walton, 96, of 500 Kerns Church Road, Sutherlin, VA went home to be with the Lord on Tuesday, December 8, 2020. He was born November 16, 1924 in Sutherlin, Virginia on the family farm, he was a son of the late Beverly Wade Walton... View Obituary & Service Information

The family of Julian Wade Walton created this Life Tributes page to make it easy to share your memories.

Send flowers to the Walton family.