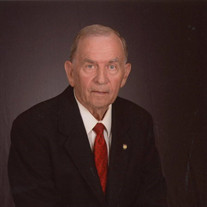 Leon Desmond Compton, 88, of Danville, went home to be with the Lord on Saturday, October 16, 2021. Leon was born in Pittsylvania County, VA. on October 3, 1933, a son of the late Richard Lacy Compton, Sr. and Mae Elizabeth Milam Compton. In high school Leon achieved four-year letters in baseball, basketball, track and field and was a member of the wrestling team. He enjoyed golf, hunting, fishing and making homemade biscuits. Leon served in the U.S. Army and worked as a Tobacconist for 46 years. During this time, he visited all 50 states and spent time in Mexico and Brazil. He was employed by P. Lorillard as a buyer, Austin Tobacco Co. as Asst. Plant Manager, Munk Austin Tobacco Co., Dibrell Tobacco Co. and Diamond Tobacco Co. Leon was a 62-year member of Kent Masonic Lodge and was a Past Master of the lodge. He was also a member of Consistory Scottish Rites and Danville Shrine Club. Leon had been married to the love of his life Nancy Poteat Compton for 67 years who stayed by his side until his home going. He was also survived by two sons, Jeffrey “JD” Desmond Compton and Richard Leon Compton; seven grandchildren; one great grandchild and several nieces and nephews. Leon was predeceased by brother, R. Lacy Compton; sister Rebekah C. Lindsey; brother, Wallace Milam Compton; and Infant Girl Compton. A memorial service will be held at Kentuck Baptist Church on Tuesday, October 19, 2021 at 2:00PM with the Reverend Allen Mahan and Reverend David Smith officiating. The family will receive friends from 1:00pm to 1:45pm prior to the service and at other times will be at the residence, 7036 Old Richmond Road, Danville VA. 24540. A private family graveside will be held at Highland Burial Park at a later date. In lieu of flowers, memorial donations can be made to Kentuck Baptist Church Building Fund or the charity of your choice. Online condolences at www.wrenn-yeatts.com Wrenn-Yeatts North Main Chapel is serving the Compton family.

Leon Desmond Compton, 88, of Danville, went home to be with the Lord on Saturday, October 16, 2021. Leon was born in Pittsylvania County, VA. on October 3, 1933, a son of the late Richard Lacy Compton, Sr. and Mae Elizabeth Milam Compton. In... View Obituary & Service Information

The family of Leon Desmond Compton created this Life Tributes page to make it easy to share your memories.

Leon Desmond Compton, 88, of Danville, went home to be with the...

Send flowers to the Compton family.