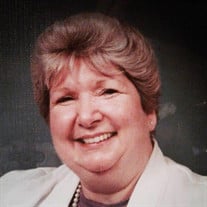 Linda Lee Bowman Rademaker, 80, of 959 Dexter Corner Rd., Townsend, DE went to be with the Lord on Friday, October 9, 2020, surrounded by family at home after a brave battle with cancer. She was preceded in death by her parents, Douglas C. Bowman and Elizabeth S. Bowman, two sisters, Patricia Linkous, Margaret “Peggy” Curry, brother in law, George Curry, and special great nephew, James Stultz. In 1962, Linda graduated from Radford College in three years with an Education degree, including three minors in Social Studies, Economics, and English. She began teaching seventh grade at Campbell Court Elementary school in Bassett in 1962. Her career as an educator lasted over twenty years, working mostly with teens and adults till retirement. The school systems included Henry County, Boones Mill, Mill Mountain, Axton area. Also, she worked with Central Piedmont Industry Council, overseeing the retraining of adults for better jobs. She even received a teaching award from her work at National Business College in Salem in 1993. She joyfully and passionately served others. She was a volunteer Girl Scout leader for nineteen years in Danville, an active member of the Business Professional Women’s Foundation, the Red Cross, Salvation Army and even a foster parent in Glade Hill for a few years. She was always an active church member where she lived, especially with Christian Heritage church in Danville. She met her husband, William Rademaker, in church while living in Glade Hill and was married in New York City on March 29, 2003. They believed God brought them together to pray for their combined total of fifty nine grandchildren and great grandchildren. Through the past seventeen years, they shared many adventures living close to family starting with Salem, then Richmond, and finally Townsend, DE. He said she was a gift from God and the love of his life. For Linda, it was always family first. She was full of song, wisdom, and encouragement. The grandchildren benefited from her sewing talents with costumes for school plays and sewing lessons. She enjoyed being a pen pal with them and managed to get the birthday cards to arrive on their special day. She showed the unconditional love of Jesus to all and treated everyone like family. Linda is survived by her husband and three children, Rebecca (Matt) Townsend of Townsend, DE, Charles Edward (Myra) Bray II of Raleigh, NC, Christie (Todd) Kruse of Cambridge, MN; seventeen grandchildren, five great grandchildren; step children, Esther (Alex) Ramírez, Debbie (Reginald) Valentine, Patricia Rademaker, Joseph Rademaker, Sheila Rademaker, Elizabeth (Wilfredo) Solano, Valerie (Roy) Rivera, Josephine (Joseph) Kakuk; twenty step grandchildren, seventeen great step children, her sister, Rita (Glenn) Dudley, nephew, Robert (Robin) Metteer, special niece and great nieces, Beth (Bubba) Stultz, Meagan (David) Henry and Heather Stultz. The family gives their heartfelt thanks to Bon Secours Health System and St. Francis Hospital in Midlothian, VA, Christiana Hospital, Helen Graham Cancer Center, and Seasons Hospice in Newark, DE for the loving care provided to Linda. Funeral services will be conducted on Friday, October 16, 2020 at 2:00 p.m. at the Wrenn-Yeatts Westover Chapel with Pastor Wayne Aaron officiating. Interment will follow the service at Danville Memorial Gardens. Masks are requested to be worn, if possible. The family will receive friends prior to the service from 1:00 p.m. to 2:00 p.m. at the funeral home. Wrenn-Yeatts Westover Chapel is respectfully serving the Rademaker family.

Linda Lee Bowman Rademaker, 80, of 959 Dexter Corner Rd., Townsend, DE went to be with the Lord on Friday, October 9, 2020, surrounded by family at home after a brave battle with cancer. She was preceded in death by her parents, Douglas C. Bowman... View Obituary & Service Information

The family of Linda B. Rademaker created this Life Tributes page to make it easy to share your memories.

Send flowers to the Rademaker family.