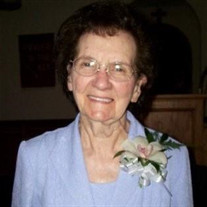 Louvern R. Mizelle, 93, of 138 Bent Tree Drive passed from this life into the joys of Heaven on Friday, November 15, 2019. She had been in declining health for the past three years. Born September 30, 1926 in Washington County, Florida, she was the daughter of the late James Chestnut and the late Josephine Chestnut. She graduated from Vernon High School in Florida in 1943. She married William G. Mizelle on June 29, 1947. They were married for 60.5 years before he was promoted to heaven where they are now reunited. They ministered together their entire married life. Mrs. Mizelle moved to Pittsylvania County in December of 1979 when her husband became pastor of the former Mountain Hill Assembly of God Church. They ministered there together for 27 years. Mrs. Mizelle was known for her kind smile, gentle ways, and loving spirit. She loved to attend church services and functions and to cook. She shared many of her baked goods with others. She also enjoyed many caramel frappes from McDonalds especially on Fridays on the way to the hairdresser. She also loved to shop with coupons and extra bucks at the local CVS with her granddaughter, Brandie. Mrs. Mizelle knew that it was the little things in life that were really the big things. Mrs. Mizelle moved many times in ministry with her husband and leaves behind friends and family up and down the east coast. She has touched countless lives with her prayers and outreach. Mrs. Mizelle is survived by two daughters, Sandra Parker and husband Darrell of the residence, and Estelle Harris and husband Earl of Cocoa, FL; a brother, William Chestnut, of Mobile, AL; four grandchildren, Steve Booth and wife Jane, Sam Booth and wife Bridget, Brandie Collins and husband David, and Jonathan Lawton and wife Shelby; and six great-grandchildren Stephen Booth, Olivia Booth, Jack Booth, Jacob Booth, Joy Collins, and William Collins; and a loving dog named Snowball. She was preceded in death by another dear furry companion, Inky. The funeral will be held at 2:00 pm on Monday, November 18, 2019 at Trinity United Methodist Church located at 409 Arnett Boulevard Danville, VA with the family officiating her celebration of life. Interment will be in Danville Memorial Gardens. Visitation will be held from 7:00-8:30 on Sunday, November 17, 2019 at Trinity United Methodist Church and at other times at the residence 138 Bent Tree Drive Blairs, VA 24527. Wrenn-Yeatts North Main Chapel is in charge of arrangements.

Louvern R. Mizelle, 93, of 138 Bent Tree Drive passed from this life into the joys of Heaven on Friday, November 15, 2019. She had been in declining health for the past three years. Born September 30, 1926 in Washington County, Florida, she... View Obituary & Service Information

The family of Louvern Mizelle created this Life Tributes page to make it easy to share your memories.

Send flowers to the Mizelle family.