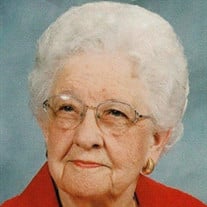 Margaret Compton Hogan, formerly of 143 Locust Lane, Danville, passed away peacefully in her sleep in the early hours of August 14. Margaret was born on December 16, 1918, and was the youngest daughter of the late J. Willie Compton and Sue Slayton Compton. She was married to I. Irvin Hogan, who predeceased her on October 7, 1989. She was a graduate of Dan River High School and was employed for L. Herman's and Thalhimers until her retirement. She had been an active member of Rivermont Baptist Church while residing in Danville. At the time of her death, she was living with her daughter, Joan Hogan Thomasson, and her son-in-law, Rick Thomasson in Newport News. She is also survived by one granddaughter Leslie McKinney and her husband Rick McKinney of Colonial Heights, Va., one grandson, Shawn Thomasson of Miami, Fl., as well as three great-grandchildren, Devin Brown, Stephen and Lyndsey McKinney. She was also predeceased by her brothers, Lynwood, Homer, Lacey and Johnnie Compton; and four sisters, Beatrice C. Adams, Thelma C. Wiles, Belva Hall and Alma Adams. Margaret was a kind, considerate person and always tried to take care of others before herself. She had a witty sense of humor and enjoyed the last few years of her life living with her daughter. She was a terrific cook and you never left her table for lack of wonderful home cooked meals. She will be missed by all that knew and loved her through the years. A graveside service will be conducted on Monday, August 17, 2020 at 2:00 p.m. at Highland Burial Park with the Reverend Joel Fletcher officiating. If you wish to view Mrs. Hogan, you may do so any time before the service at Wrenn-Yeatts North Main Chapel. Wrenn-Yeatts North Main Chapel is respectfully serving the Hogan family.

Margaret Compton Hogan, formerly of 143 Locust Lane, Danville, passed away peacefully in her sleep in the early hours of August 14. Margaret was born on December 16, 1918, and was the youngest daughter of the late J. Willie Compton and Sue... View Obituary & Service Information

The family of Margaret Compton Hogan created this Life Tributes page to make it easy to share your memories.

Send flowers to the Hogan family.