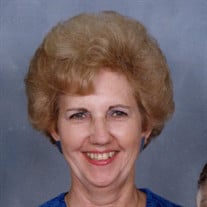 Margaret Brumfield Robertson, 85, of 679 Hanover Pl, Ridgeway, VA, died on Tuesday, September 7, 2021 at her residence after being in declining health for the past seven years. Mrs. Robertson was born on May 22, 1936 in Pittsylvania County, VA, a daughter of the late Ernest D. Brumfield and Alice Ruth Yeatts Brumfield. She lived most of her life in the Danville area where she was a homemaker. She was a member of Brush Arbor Baptist Church where she had served as past treasurer for eighteen years. She was also a Sunday school teacher for many years. Mrs. Robertson was known for her love of gardening and she also enjoyed bowling. On June 6, 1970 she married Billy Howard Robertson, who died on December 6, 2013. In addition to her parents and husband she was predeceased by a step-son, Arnie L. Robertson; sisters, Virginia B. Adams and Ernestine B. Taylor; and brothers, Glen Brumfield, Evan Brumfield, Roy W. Brumfield, Albert A. Brumfield, Averette H. Brumfield, Landon L. Brumfield, and Bobby L. Brumfield. Survivors include her children, Gregory Worley (Judy) of Ridgeway, VA, Jeffery Worley (Vonda) of Danville, VA, Dennis Worley (Frances) of Reidsville, NC; step-children, Lori Robertson of Cascade, VA and Donna R. Howell of Danville, VA; daughter-in-law, Cindy G. Coleman of Danville, VA; brother, Buddy Brumfield (Betty) of Keeling, VA; nine grandchildren and thirteen great grandchildren. Funeral services will be conducted on Friday, September 10, 2021 at 11:00 AM at the Wrenn-Yeatts Westover Chapel with the Reverend Jim Curran officiating. Interment will follow the service in Danville Memorial Gardens. The family will receive friends prior to the service from 10:00 AM to 11:00 AM at the funeral home. Memorial donations can be made to a charity of your choice. Wrenn-Yeatts Westover Chapel is respectfully serving the Robertson family.

Margaret Brumfield Robertson, 85, of 679 Hanover Pl, Ridgeway, VA, died on Tuesday, September 7, 2021 at her residence after being in declining health for the past seven years. Mrs. Robertson was born on May 22, 1936 in Pittsylvania County,... View Obituary & Service Information

The family of Margaret Brumfield Robertson created this Life Tributes page to make it easy to share your memories.

Send flowers to the Robertson family.