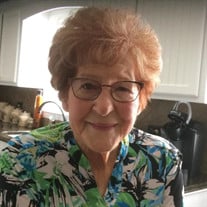 Margaret Hawkins Wagner, 92, of Mt. Hermon, VA, died on Friday, January 8, 2021, at her daughter’s residence, in Cascade, VA, after a brief decline in health for the past month. Mrs. Wagner was born in Frostburg, MD, on April 21, 1928, a daughter of the late Watkin Hawkins and the late Elizabeth Jane Reese. Since 1966 she had lived in the Danville area where she was a homemaker. She was a member of Piney Forest Seventh-Day Adventist Church. In her later years, she loved spending time with her grandchildren and great grandchildren. On November 5, 1949, she married Fred Wagner, who predeceased her on June 14, 2009. She is survived by two daughters, Brenda Kilgore and husband Mike, of Cascade, VA, and Lynn Fowler and husband Rick, of Danville, VA; a son, Allen Wagner and wife Becky, also of Danville; ten grandchildren; sixteen great grandchildren; and a brother, Richard Hawkins, of Hagerstown, MD. In addition to her parents and husband, she was predeceased by a son, Thomas Wagner; a sister, Virginia Goodwin; and four brothers, Stuart, Marvin, Jim, and Bob Hawkins. A memorial service will be held on Sunday, January 10, 2021 at 2:00 PM at the Wrenn-Yeatts Westover Chapel conducted by Pastor Luis Beltre and Pastor Seth Lackey. A private interment will take place in Danville Memorial Gardens at a later date. In lieu of flowers, the family suggests that memorial donations be to Piney Forest Seventh-Day Adventist Church, 1543 Piney Forest Rd, Danville, VA, 24540. Wrenn-Yeatts Westover Chapel is serving the Wagner family. Online condolences at www.wrenn-yeatts.com

The family of Margaret Hawkins Wagner created this Life Tributes page to make it easy to share your memories.

Send flowers to the Wagner family.