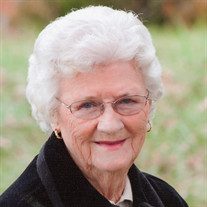 Margaret Hannah Barker Walters, 91, of the Mountain Hill Community in Ringgold, VA, went home to be with the Lord on Tuesday, April 7, 2020, after being in declining health for the past several years. Margaret was born in Caswell County, NC, on January 1, 1929, a daughter to the late Walter R. Barker and Rosa Bray Barker. She had lived all of her life in the Mountain Hill Community of Pittsylvania, VA, where she was a homemaker. She always enjoyed helping and doing for others. Margaret was a very faithful and active member of Glen Hill Baptist Church as long as her health permitted her to attend. She served as a choir member and she was very much a pillar of the church in her quiet and thoughtful ways. Margaret loved the Lord, her family and her friends. Margaret was first married to the late Tom Martin who predeceased her in November of 1974 and on November 25, 1976, she married the late Thomas Jackson Walters, Sr., who died on July 23, 2013. Margaret is survived by one loving daughter, Patricia M. Guthrie (Earl) of Ringgold, VA; two stepchildren, Thomas Jackson Walters, Jr. and Vicki W. Francis; two grandchildren, Melanie G. Owen (Chris) and Blake Guthrie and fiancée Hannah, all of Ringgold; two great grandchildren, Hannah and Grayson Owen; and one brother, Walter Barker, of Chatham, VA. She was predeceased by three brothers, Robert, Lawrence and Sherwood Barker; and four sisters, Hazel Wagstaff, Laura Tetzlaff, Elayse Foushee, and Irene Stewart. The family is aware that there are many people who would like to attend Mrs. Walters’s funeral, however, due to the constraints of public gatherings during the COVID-19 outbreak, there will be a private graveside service in Highland Burial Park. For the time being, the family encourages you to leave your memories and condolences online at www.wrenn-yeatts.com. A special thank you to the staff of Brookdale Danville Piedmont and Liberty Hospice for all their kind care shown to Mrs. Walters. The family suggests memorial donation may be made to the Danville Pittsylvania Cancer Association, 223 Riverview Dr., Suite J, Danville, VA, 24541 or to Ringgold Fire and Rescue, P.O. Box 10, Ringgold, VA, 24586. Wrenn-Yeatts North Main Chapel is serving the Walters family.

Margaret Hannah Barker Walters, 91, of the Mountain Hill Community in Ringgold, VA, went home to be with the Lord on Tuesday, April 7, 2020, after being in declining health for the past several years. Margaret was born in Caswell County, NC,... View Obituary & Service Information

The family of Margaret Hannah Barker Walters created this Life Tributes page to make it easy to share your memories.

Send flowers to the Walters family.