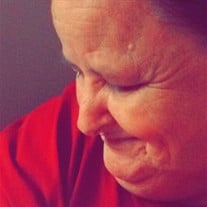 Margie Lee Dix Dunkley, 65, of 321 Plum Street, Danville, died on Sat., Jan. 18, 2020 at Sovah Health. Margie was born in Danville on Aug. 12, 1954, daughter of the late Dock Franklin Dix and Stella Laws Dix. She spent all of her life in the Pitts. County and Danville areas where she was a housekeeper for the Leeland Hotel for over 21 years. She enjoyed gardening where she would feed hummingbirds and place her lighthouses that she liked to collect. She also enjoyed plastic canvas knitting with family and friends. Margie loved Christmas and decorating for the holiday season. She was first married to William A. “Bill” Starr, Jr. who died in 1980; she then married Donald Lee Dunkley who survives of the residence. Margie is also survived by her daughter, Angela “Angie” Dickerson (James) of Ringgold, VA; stepson, Darel Dunkley of Pelham, NC; sisters, Nancy Watson (James) of Sutherlin, VA, Amelia Revis of Strafford, VA, Ruby Carter of Danville, VA, Alma Hinton of Augusta, GA; brother, Robert Burnett of Danville, VA; grandchildren, Brenda, Justin, Crystal, James, Jr., Madison, Joseph, and Marlee; great grandchildren, Kaitlynn and Bayleigh; and numerous nieces and nephews. In addition to her parents and first husband she was predeceased by her siblings, Pinky Willie Dix, Howard Burnett, Walter Burnett, Jr., Margaret Spain and Carolyn Chaney. A memorial service will be conducted on Saturday, January 25, 2020 at 2:00 p.m. at Kerns Memorial United Methodist Church with Pastor Kathy Roach officiating. The family will receive friends following the service.

The family of Margie Dunkley created this Life Tributes page to make it easy to share your memories.

Send flowers to the Dunkley family.