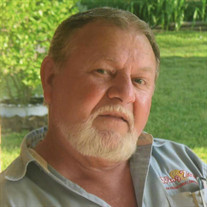 Marvin Daniel Hamlett,73, of 1525 North Main Street, Yanceyville, NC went home to be with the Lord early on Saturday, April 3, 2021 after being in declining health for the past several years. Marvin was born in Alamance County, NC on May 22, 1948 a son to the late Claude Elwood Hamlett and Margaret E. Butler Hamlett. He had lived all of his life in Caswell County where he had graduated from Bartlett Yancey High School. Marvin worked as a Truck Driver and loved what he was doing until he had to retire due to health reasons. He was a member of Grier’s Presbyterian Church. Marvin loved the Lord and he really enjoyed kidding around and making people laugh. He had a good heart and was always willing to share. Marvin was married to the late Teresa Hancock Hamlett who died 2016. Marvin is survived by two daughters, Ann Marie Hamlett of Reidsville, NC, Tammy Duncan (Randy) of Providence, NC, five grandchildren, Heather & Amanda Cheshire and Adam, Lane, & Casey Duncan, one sister, Margaret Ann Williams (Gene) of Leasburg, NC, two brothers, Claude Hamlett of Leasburg, NC, Lynn Hamlett of Mebane, NC and a Special friend, Shelia Williams. He was predeceased by his parents and one sister, Faye Marie Hamlett. A Memorial Celebration of Life Service will be conducted for Marvin on April 6, 2021 at 2:00 p.m. at Grier’s Presbyterian Church, 569 Grier’s Church Road, Leasburg, NC 27291 by the Reverend Rick Lancaster. The family will receive friends at the church from 1:00 to 2:00 p.m. prior to the service and at other times they will be at the residence of Gene & Margaret Ann Williams, 2122 NC Hwy. 119 North, Leasburg, NC 27291. Wrenn-Yeatts Yanceyville, NC is respectfully serving the Hamlett family. Memorial donations can be made to Grier’s Presbyterian Church at 569 Grier’s Church Road or to Hospice of Alamance County.

Marvin Daniel Hamlett,73, of 1525 North Main Street, Yanceyville, NC went home to be with the Lord early on Saturday, April 3, 2021 after being in declining health for the past several years. Marvin was born in Alamance County, NC on May 22,... View Obituary & Service Information

The family of Marvin Daniel Hamlett created this Life Tributes page to make it easy to share your memories.

Send flowers to the Hamlett family.